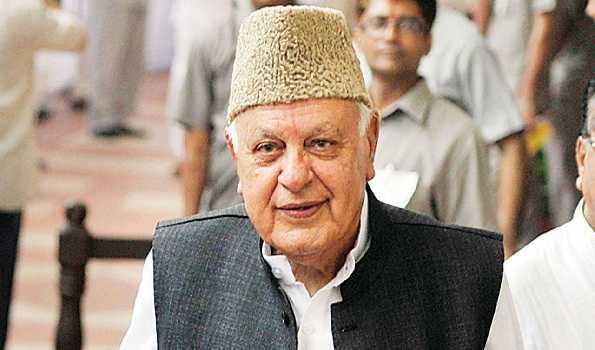 Srinagar :  In a surprising development, former Jammu and Kashmir Chief Minister Farooq Abdullah has decided to step down as the National Conference President.

The party will be conducting the election for the next chief in the first week of December. Till then 85-year-old Abdullah will continue to lead the party.

After Abdullah’s announcement to step down, the party on Friday issued notification for holding elections to the post of president on December 5- the birth anniversary of NC founder Sheikh Mohammad Abdullah. The notification for the election was issued by party general secretary Ali Mohammad Sagar.

A spokesman of NC said Abdullah informed his colleagues of his decision to step down.

“In spite of the best efforts of senior colleagues, Dr Sahib was adamant that he wouldn’t review his decision. In light of this sudden announcement which has caught everyone by surprise, the party General Secretary, as per the party constitution, has been tasked with conducting the election for party President which will be completed on December 5. Until that time Dr Sahib continues as President of the party,” the spokesman said earlier on Friday.

Party sources said Abdullah made the announcement during a party meeting of in-charge segments, District Presidents and other provincial office bearers here on Thursday.

In his speech, he asked the party leaders to take control of the party as his health doesn’t permit him to head the party. Abdullah’s son and Party Vice President Omar Abdullah was also present in the meeting.

Party sources said Abdullah was not keen on re-election and there is every possibility that Omar may be elected as the party’s new president. From 1981, Farooq Abdullah barring 2002 to 2009, served NC as party president. In 2002, his son Omar became NC chief.

Farooq Abdullah is also president of the PAGD- People’s Alliance for Gupkar Declaration, an amalgam of mainstream parties seeking reverse of revocation of J&K’s special status.