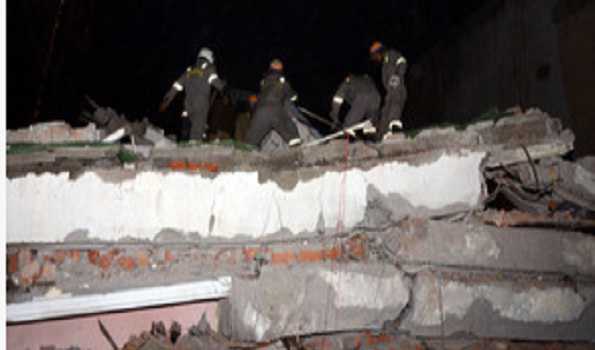 Lucknow: Three persons were killed and several people are feared trapped inside the debris of a four-storied residential building which collapsed on Wazir Hassan road in Lucknow on Tuesday evening, official sources said here.

Deputy Chief Minister Brijesh Pathak said that so far three bodies have been recovered which have been sent to the hospital. “The building collapsed all of a sudden. A rescue operation is being carried out. The NDRF and SDRF teams have reached the spot and police and fire brigade jawans are carrying out the rescue operation,” he said.

He said that JCB machines and other resources have been summoned on the spot. “It’s an unfortunate incident. Till now three bodies have been recovered which have been sent to the hospital. We are making all efforts to save the people alive. As of now only a guess can be made and the real picture will emerge after sometime,” they said.

Meanwhile, Chief Minister Yogi Adityanath has taken cognizance of the incident in which an old building collapsed. He has directed the officials of the district administration to take the injured to the hospital immediately for their proper treatment.

While praying for speedy recovery of the injured, the CM has directed the District Magistrate and senior police officials to reach the spot immediately with SDRF and NDRF teams and carry out relief and rescue operations.

In addition to this several hospitals have been directed to remain on alert mode. In the meantime, Urban Development Minister AK Sharma, along with Advisor to CM Awanish Awasthi, Divisional Commissioner Roshan Jacob, DM Surya Pal Gangwar and senior police officials have reached the spot and are monitoring the rescue and relief work.

Police sources said that the incident took place around 7 pm when Alaya Apartments on Wazir Hasan road collapsed. It is being said that six to seven families lived in the building, but the figure has not been confirmed by the authorities.