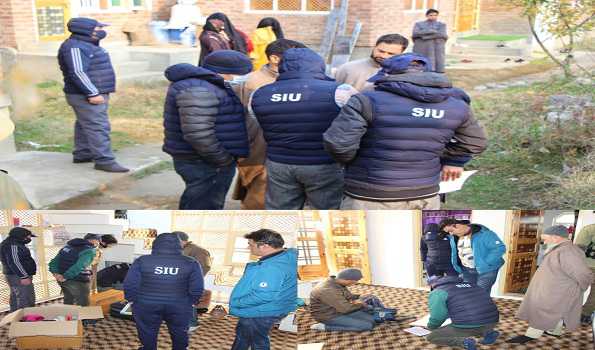 Srinagar :  J&K Police’s Special Investigation Unit (SIU) on Friday conducted raids in Kulgam district of Jammu and Kashmir during the probe of killing of a lady school teacher in May this year.

Rajni Bala, a resident of Samba in the Jammu region, was killed on May 31 in the Gopalpora area of Kulgam where she was posted as a teacher. In mid June, police had said two militants involved in the killing of a school teacher were killed in an encounter in Kulgam.

“ The residential houses of two suspects- Abdul Wakeel Shah of Danow Mukandpora and Tahir Ahmad Sofi of Kulgam town were searched in connection with case FIR No. 49/2022 U/S 302 IPC, 7/27, 7/25 Arms act, 13, 16, 18, 20, 23, 38, 39 UA(P) Act, pertaining to killing of teacher Rajni Bala,” a police statement said. “ During the search, SIU Kulgam gathered relevant information and the role of these suspects in the commission of crime is being examined.”

The statement said proper SOPs (standard operating procedures) were followed during the raids- aimed at “eliminating the terror ecosystem.”

“These raids are carried out to eliminate the terror ecosystem in the district by identifying various overground workers and supporters of terrorism,” the police statement said, adding “these raids will continue in future also for the logical conclusion of all UAPA cases.”