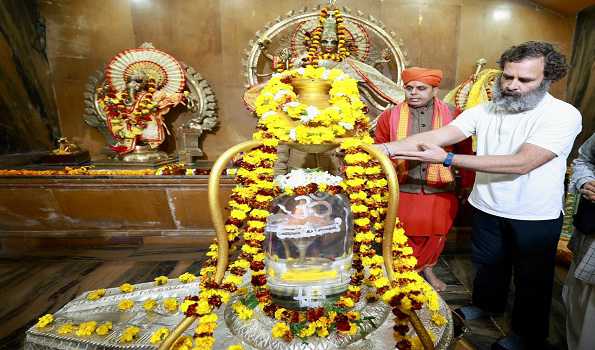 Jammu :  Stating that unemployment has increased manifold all over the country and its rate is highest in Jammu, Congress leader Rahul Gandhi on Monday said that the Agniveer scheme is “weakening” the Indian Army.

Gandhi was addressing the gathering here at Satwari Chowk after Bharat Jodo Yatra entered the Jammu district from neighbouring Samba district before wrapping up the day’s schedule of the Yatra.

“Several delegations met during the yatra in Jammu and everyone raised different issues. Some said that earlier the local officers were in the administration but now outsiders are running the government affairs and their concerns are not listened to,” Gandhi told the gathering and stated that the Congress party will fight for the restoration of statehood in Jammu and Kashmir.

“Without knowing the ethos, the Agniveer scheme was introduced. Even Army personnel too are aware of this fact but out of compulsion, they are tight lipped. It is unfortunate that Agniveers after retirement are not entitled to pension,” said Rahul Gandhi.

He said that a delegation of Kashmiri Pandits met him this morning and he was surprised to know that when they apprised him that recently a delegation met Lieutenant Governor Manoj Sinha seeking relocation of Prime Minister Employment Package employees posted in Kashmir, but were replied not to ask for alms.

“I want to tell the Lieutenant Governor that they were not begging but asking for their rights. You (LG) must apologise from the community for your remarks,” said the Congress leader.

Meanwhile attacking the Prime Minister Narendra Modi led government in the Centre, Rahul Gandhi said, “a section of business tycoons are being benefitted and it led to rise in unemployment in the country.”

Gandhi also asked the media to highlight the issues bothering masses and expressed gratitude to the public for showering love in Bharat Jodo Yatra and strengthening him.