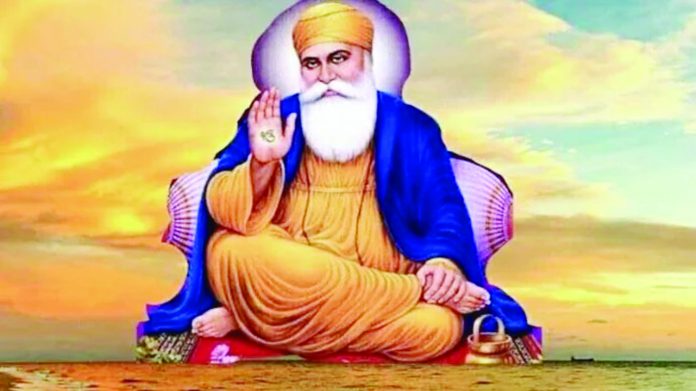 VINOD CHANDRASHEKHAR DIXIT
Guru Nanak Jayanti is one of the most prominent Sikh festivals which is observed as the birthday of the first of their gurus, Guru Nanak. The founder of Sikhism, Guru Nanak played an important role in shap- ing and strengthening the Sikh community.Guru Nanak Jayanti, also known as ‘Gurupurab’ is considered one of the most important festivals in Sikhism. Guru Nanak was born on April 15, 1469, at Rai Bhoi Ki Talwandi, near Lahore, which is in the Sekhpura district of modern-day Pakistan.Guru Nanak had always been a spiritual person since childhood. On this day, Sikhs from across the world pay their tributes to the Guru who  now known as Nanaka Sahib, near Lahore (in Pakistan) in 1469. This year marks the 553rd birth anniversary celebrations.While Diwali falls on the 15th day of the Kartik month as per the Hindu Lunar calendar, Guru Nanak Jayanti falls fifteen days after that on the auspicious occasion of Kartik Purnima.
He led so many people away from superstition and hypocrisy and showed them the correct path.One of the most famous teachings attributed to Guru Nanak Dev Ji is that there is only one God, and all human beings can have direct access to God. He denounced the caste system.
The festival is celebrated on the day of Kartik Poornima, which is the fifteenth lunar day in the month of Kartik according to the Hindu calendar, and usually falls in the month of November by the Gregorian calendar.Guru is inspiration, Happy Gurpurab! May you
find happiness and peace with the blessings of Guru Nanak Dev Ji.To spread the message of oneness and puri- ty, he travelled several miles. Mainly, his teachings involved three things, namely ‘Vand Chakko’, ‘KiratKaro’ and ‘Naam Japna’. ‘Vand Chakko’ means sharing with oth- ers and helping the needy person. ‘Kirat Karo’ is making a living honestly without exploiting anyone and without any fraud, and ‘Naam Japna’ involves controlling our evils by meditating on the name of God.He focused on the rights of women and equality. His teachings were passed to further generations through his successor and were included in Shri Guru Granth Sahib Ji. It is a holy book of Sikhs that consists of all the teaching of Sikh Gurus and other spiritual leaders also.
Although there are no official reports about the origin of this festival, it is believed that the custom of celebrat- ing Guru Nanak Jayanti is as old as Sikhism. There is a famous hymn; Sut Guru Nanak Purgattiya, Mittee Dhund Jugg Channun Hoyaa which means a Divine Teacher Nanak has taken holy birth; a great fog is lifted, and the world is bathed in divine light.Guru Nanak Dev firmly believed that an individual could connect to God through sincere prayers. He didn’t encourage traditions that included sacrifices. All his teachings and preachings are composed together to form the sacred book called Guru Granth Sahib. It is the central holy religious scrip- ture of Sikhism, regarded by Sikhs as the final, sovereign and eternal Guru.
The main verses from the Guru Granth Sahib elabo- rate that the creator of the universe was one. His verses also propagate selfless service to humanity, prosperity, and social justice for all irrespective of any demograph- ic differences. Sikhism also forbids the concept of mes- sengers and reincarnation. The role of a guru as a spiri- tual and social master forms the base of the Sikh reli- gion. He focused on ‘Kirat Karo’ and ‘Vand Chhako’.
That is, earn an honest living, without exploitation or fraud and share with others, help those who are in need, so you may eat together, respectively. Let us spread the message of love, peace, and harmony among people as Guru Nanak ji wanted that nobody must be discriminat- ed against on any grounds and people must live with unity. He was only the initiator of the community kitchen where people of any religion either rich or poor sit and eat together.
[email protected]