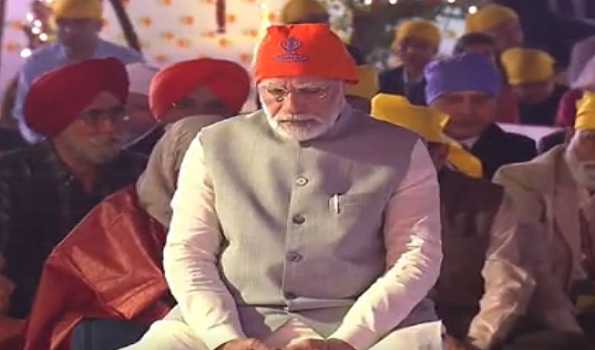 New Delhi : On the eve of Guru Nanak Jayanti, Prime Minister Narendra Modi will participate in the 553rd birth anniversary celebrations of Guru Nanak Dev at 95, Lodhi Estate here on Monday around 8 PM.

The celebration is taking place at the residence of Iqbal Singh Lalpura, Chairperson of National Commission for Minorities, officials said.

The Prime Minister will offer prayers to Guru Nanak Dev and also address the gathering on the occasion.

Guru Nanak Jayanti, also known as Gurpurab, will be celebrated on Tuesday, the 8th November.

Every year, on the full moon day of Kartik month, known as Kartik Purnima, this day is celebrated.

Sikhs all around the world celebrate the day with love and devotion. On this day, a 48-hour non-stop recitation of the Guru Granth Sahib, called Akhand Path, is also held in the Gurudwaras.

It will be observed as the 553rd birth anniversary of Guru Nanak Dev.