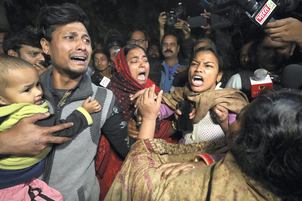 One more person was rescued from the rubble of a building that collapsed here last evening, taking the total number of people pulled out so far to 15, while at least two more are still feared trapped, a senior official said Wednesday.

A coordinated multi-agency search operation is underway to locate the two, even as Chief Minister Yogi Adityanath ordered setting up a three-member committee to probe the incident and submit a report in a week. The Lucknow administration, meanwhile, ordered lodging of a case against the builder and owners of the multi-storey building in Hazratganj area, a government statement issued here said on Wednesday.