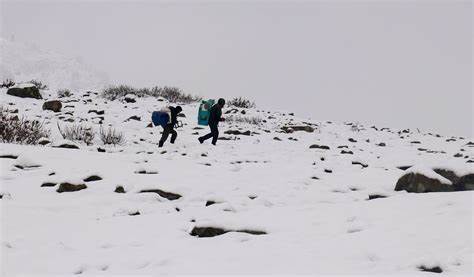 Kashmir valley continued to experience cold conditions with the minimum temperatures recorded below freezing point all across on Thursday even as the Meteorological Department forecast dry weather to continue during the next 24 hours.

Tourist hotspot of Pahalgam in south Kashmir was the coldest place and recorded a low of minus 4.8 degree Celsius today against the minus 4.4 degree Celsius recorded a day ago. The temperature was minus 2.0 degrees below normal during this time of the season, the MeT office said.

Srinagar continued to experience below freezing point night temperature for the second consecutive day on Thursday with minus 0.8 degree Celsius which was minus 0.9 degree Celsius below normal during this period of the season.

However, the maximum temperature in Srinagar was recorded at 0.2 degree Celsius above normal against the 13.8 degree Celsius even as bright sun appeared on Thursday.

The day temperature in other stations of the Kashmir valley also recorded above normal temperature with several notches.

The ski resort of Gulmarg in north Kashmir had a low of minus 2.4 degree Celsius on Thursday against the minus 3.8 degrees Celsius recorded a day ago which was minus 0.3 degrees down from the previous night.

The night temperatures in other parts of the Valley also settled below freezing point with the frontier Kashmir district of Kupwara registering a low of minus 2.4 degrees Celsius, Qazigund at minus 2.0 degrees Celsius and Kukernag had a low of 1.0 degree Celsius on Thursday, the MeT office said.