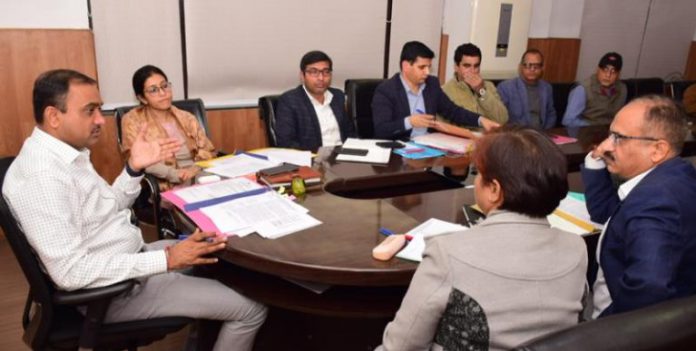 Divisional Commissioner, Ramesh Kumar today reviewed the status of land acquisition, land issues pertaining to the Jammu Airport Expansion Project, Transfer of Army land to Jammu University, Transfer of JDA land to Army at Nagrota, Transfer of state land to JDA in lieu of land to be provided to Army, Transfer of land 100 Kanals JDA land to Revenue Training Institute at Birpur in lieu of RTI land at Gole Gujral.

Seeking the details about Jammu Airport Expansion project, the concerned officers apprised that the land acquisition has almost been completed and only the land for Animal Husbandry Belicharna is pending. However, they said that around 240 Kanal land with structures and buildings was yet to be acquired.

It was further informed that alternative land has been provided to the Animal Husbandry Department for shifting its hatchery and office buildings. The land was provided in Nagrota and Chatha areas.

The Div Com also inquired about the present status of work on construction of Animal Husbandry buildings at Nagrota and Chatha. It was informed that the work was in progress at both the locations.

Responding to the issues related to allotted land, the Div Com asked DC Jammu to resolve the same for smooth execution of work on Animal Husbandry buildings.

The Div Com stressed to vacate the prioritized buildings at the earliest for smooth execution of work on airport expansion.

While reviewing Transfer of Army land to Jammu University, the Div Com asked VC JDA to expedite the process and transfer identified land to Army at Nagrota at the earliest, while the DC Jammu was asked to transfer state land to JDA in lieu of land to be provided to Army.

While reviewing Transfer of 100 Kanal JDA land to Revenue Training Institute at Birpur in lieu of RTI land at Gole Gujral, it was informed that the JDA has identified the land at Birpur which is not suitable for establishment of Revenue training Institute.