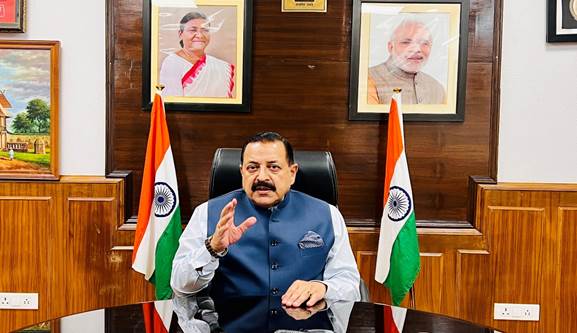 NEW DELHI: Union Minister of State (Independent Charge) Science & Technology; Minister of State (Independent Charge) Earth Sciences; MoS PMO, Personnel, Public Grievances, Pensions, Atomic Energy and Space, Dr Jitendra Singh announced here today that 25 lakh Digital Life Certificates for Central Government Pensioners had been generated in just 20 days and lauded the Department of Pension & Pensioners’ Welfare for having undertaken this nation-wide campaign.
Addressing a press conference, Dr Jitendra Singh informed that Department of Pension organized special awareness camps from 1st to 19th November, 2022 in different cities all over India from Srinagar in the North to Nagercoil (Kanyakumari District) in the South and from Guwahati in the East to Ahmedabad in the West. He said, out of 25 lakh DLCs, 2,20 lakhs have been created through Face authentication by latest Face Recognition Technology, thus providing a huge relief, specially to the aged and infirm elderly population
Dr Jitendra Singh said, the objective of this nation-wide campaign is to promote the use of Face Authentication technology and DLC thereby ensuring transparency and “Ease of Usage”. He said, all the registered Pensioners’ Associations, Pension Disbursing Banks, Ministries of Government of India and CGHS Centers had been directed to promote the Digital Life Certificate/Face Authentication Technique for giving Life Certificate by organizing special camps for ‘Ease of Living’ of pensioners, thus setting an example of “whole of government” approach.
Dr Jitendra Singh informed that the specific cities covered so far are Delhi, Noida, Chandigarh, Mohali, Jammu, Srinagar, Nagpur, Pune, Allahabad, Jalandhar, Gwalior, Thrisur, Madurai, Nagercoil, Varodara, Ahmedabad, Guwahati, Hyderabad, Ambarnath (Mumbai), Bhubhneshwar, Balaasore, Cuttack, Thirvanthapuram, & Jaipur. He said, in the following two weeks this department will conduct 14 more DLC awareness camps in different parts of the country. The campaign was widely appreciated by the pensioners residing in different parts of country, the Minister added.
Dr Jitendra Singh said, submission of Life Certificates is an important activity to be carried out by pensioners every year in the month of November (with special provision for pensioners aged 80 years and above to submit their Life Certificates in the month of October) to ensure continuity of their pension. He said, in the traditional mode, pensioners had to present themselves before the Pension Disbursing Authority for physical submission of their Life Certificate which entailed waiting at the bank branches in queues for this purpose. This was found inconvenient for the old, ailing and infirm pensioners and further, there was no mechanism for the pensioners to get a status regarding updation of their Life Certificates in the records of the Pension Disbursing Authority, the Minister added.
Dr Jitendra Singh took pride in stating that Department of Pension was the first in India to develop a Face Recognition Technology system based on Aadhaar database in association with Ministry of Electronics and Information Technology to give Life Certificate from any Android based smart phone to overcome the challenge of certain pensioners not being able to give DLC due to fading bio-metrics.
As per this facility, the identity of a person is established through face recognition technique and DLC gets generated. He added that this breakthrough technology, launched in November 2021, reduced the dependence of pensioners on external biometric devices and made the process more accessible and affordable to masses by leveraging smartphone-based technology. The Minister said, this was a milestone achievement in ensuring ‘Ease of Living’ for the elderly.
The nation-wide campaign was conducted by the officials of DoPPW with the help of State Bank of India (SBI) & Punjab National Bank (PNB), who sponsored the campaign sites. The campaign saw the active participation of registered Central Government Pensioner Associations, the representatives of Indian Post & Payment Bank (IPPB), Unique Identification Authority of India (UIDAI), National Informatics Centre (NIC) as well as Controller General of Defence Accounts (CGDA) in every city.
Dr Jitendra Singh also congratulated the banks for their wholehearted participation in the campaign. He said, SBI and in certain cities the Punjab National Bank joined hands with the Department and provided the Camp venues in different cities. Different officials of DoPPW have been nominated at different cities to oversee the progress of the Campaign.
Secretary, Department of Pension & Pensioners’ Welfare and DARPG, V. Srinivas said on the occasion that to enhance ‘Ease of Living’ for Central Government pensioners, DoPPW has been promoting Digital Life Certificate i.e. Jeevan Pramaan extensively. He said, initially submission of DLCs using biometrics was commenced and thereafter the Department roped in the 50 registered Pensioners’ Associations in different cities to promote DLCs.
Mr Srivas informed that the Department further associated the Indian Post & Payment Bank (IPPB) to include DLC among one of the door-step services provided through the agency of its Gramin Dak Sevaks, numbering more than 1,90,000. Pension disbursing Banks were also asked to adopt the methodology of video based KYV method of Life Certification and a consortium of 12 Banks asked to provide door-step service for DLC. In order to prevent super senior pensioners aged 80 years and above, DoPPW issued orders permitting this age group to give their LC from October 1 itself in order to provide them an exclusive window and avoid rush at various pension disbursing bank branches. Indian Embassies/Consulates were advised to assist Pensioners living overseas who can now also give a DLC by receiving an OTP on their email.
Based on the feedback received of the Face Authentication App developed for this purpose, NIC was quick to respond and incorporate the same. For example, the life certificate could be opened in the App after receiving an OTP and downloading the same. But because of feedback received from pensioners, the Life Certificate can be accessed immediately after keying in the OTP. The State Bank of India officials at all locations came out in full strength to promote the campaign and their officials were seen enthusiastically participated even on holidays. Similarly, the participation by the Registered Pensioners’ Associations was exemplary and their representatives helped in spreading awareness about the Face Authentication technique of LC.