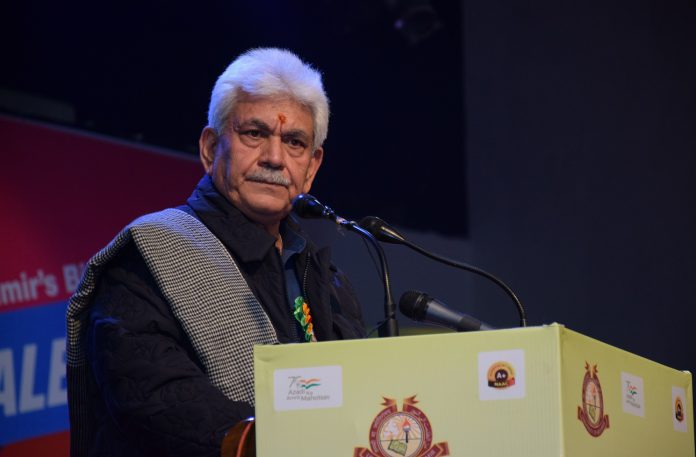 He said that almost all migrant Kashmiri Pandits have been posted at various district headquarters and there may be some whose issues are being settled down. “We have a nodal officer who is monitoring the grievances of migrant KPs. All measures are being taken to resolve their issues,” the LG said, adding that it was not like one would sit home and enjoy salary and other perks.
He, however, said that some targeted killings of KPs took place after which migrant KP groups raised certain concerns. “The administration took swift action and resolved the issues confronting the KP employees working under PMRP,” the LG said.

To a query that there were militant threats about opening of developmental centers in J&K, the LG said that it was the J&K Administration and the Centre that takes calls on who would work, who would open offices and who would invest here. “Who has to stay here or not will be decided by the J&K administration and Government of India,” the LG said.
Asked whether the administration would allow Congress leader Rahul Gandhi’s Bharat Jodo Yatra set to enter J&K in January, he said the government believes in democratic principles and no drive or march that is held within such principles are banned or disallowed. “As far as Covid protocol, we will see and monitor what would be Covid situation (in January),” he said, adding that only such activities that go against India’s sovereignty are banned and disallowed.

To a query that some media reports suggest investment proposals were on papers only, the LG said that he too came through such news reports. “But the fact remains that there have been investments of Rs 100 Cr, 200 Crore and even Rs 900 Crore as well. We are facing infrastructure related issues at some places that are being addressed. I assure you all that Rs 70,000 Crore investment will be a reality soon,” he said.
The LG said that in the next five years, every town will be developed under the My town My pride program while aspirational Panchayat Developmental Programs will be launched for the development of Panchayats. He also announced a slew of measures that his administration will be taking to promote and push the J&K’s Agriculture and its allied sectors to promote UT’s economy.(Agencies)