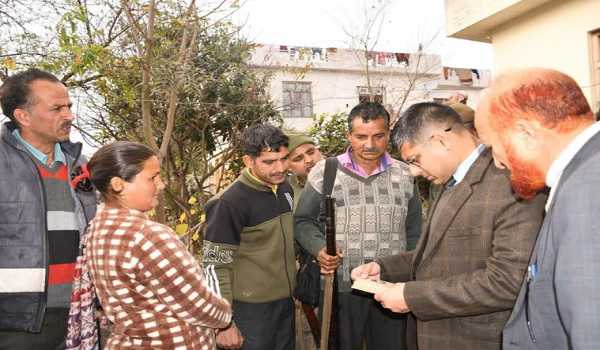 Jammu :  The Deputy Commissioner Rajouri, Vikas Kundal, on Saturday inspected the allotment of guns and cartridges to the Village Defence Guards (VDGs) to bolster the security of the area in Baljaralan area of the district.

The weapons and ammunition is being provided to the VDGs by Police authorities.

A camp was set up for the purpose. The Deputy Commissioner interacted with the members of the VDGs and inquired about their familiarity with the weapons.

He also urged them to work for the safety and security of the people in the area.

The VDGs appealed for their special training to ensure that they are comfortable while handling the weapons.

In response, the Deputy Commissioner assured that village-wise training programs would be organized for the VDGs after the weapons are distributed.

He also assured that appropriate measures would be taken to maintain peace and tranquillity in the district.

On January 1, six people were killed when terrorists attacked in Dhangri village in which four villagers were killed while two others including a child were killed in an IED explosion the next day at the same site. Around 15 people were injured in the incidents.