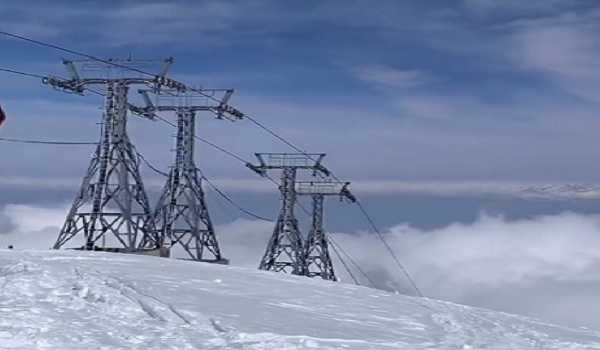 Srinagar :  Upper reaches of Kashmir valley including Gulmarg experienced a fresh snowfall while plains lashed by rains resulted in closure of Mughal road connecting Shopian district in south Kashmir to Poonch and Rajouri districts of Jammu region on Sunday.

Meteorological Department Srinagar forecast of widespread light to moderate rain/snow/traces over Jammu and Kashmir during the next 24 hours and decrease in precipitation in the following two days.

However, traffic on Srinagar-Jammu national highway was playing as usual, a traffic police tweet said.

Famous ski resort of Gulmarg in north Kashmir received a mild snowfall much to the delight of the tourists staying there. The tourists were seen enjoying the snow in the valley of meadow on Sunday.

Gulmarg was the coldest place in Kashmir where the minimum temperature plunged to minus 3.6 degree Celsius on Sunday and it also received 16.8mm of rainfall during the period.

Most parts of Jammu and Kashmir have received moderate rainfall during the night and early morning hours.

Today, mostly cloudy weather is expected with chances of light/moderate rain showers at a few places, however, nothing major is expected, an independent weather observer Faizan Arif told UNI.

He said the Snow chances are less in plains as the temperatures are not favorable, however more rain showers are on the cards, he added.

A Western Disturbance is expected to occur on November 9-10 and may cause light to moderate rain/snow at many places, particularly on November 10, he said.

The minimum temperature dipped further in Kashmir valley following snowfall and rains. Srinagar recorded a minimum to 5.2 degree Celsius on Sunday and it also received 26.1mm of rainfall during the period.