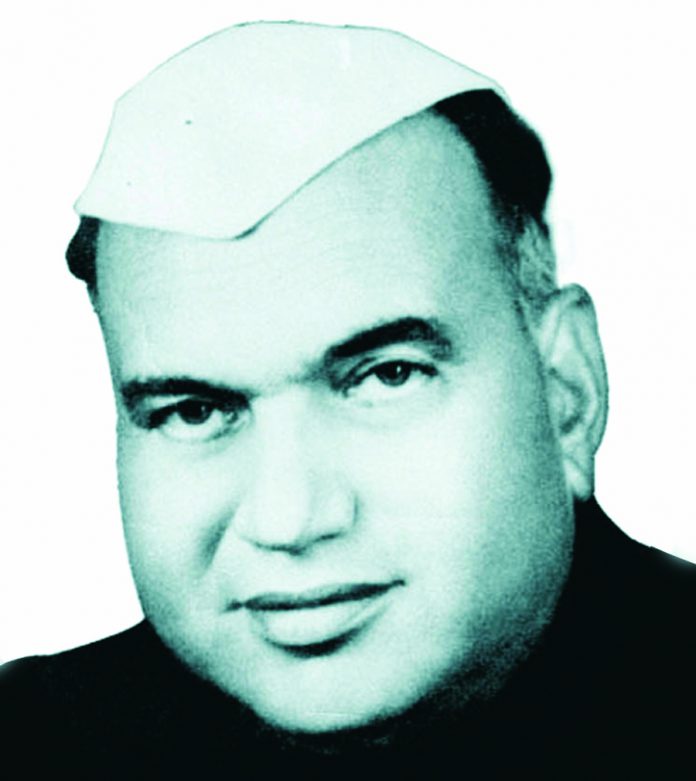 Popularly known as the “The People’s man”, Pandit Girdhari Lal Dogra had strived hard for the overall development of the Jammu Region as a Finance Minister of the erstwhile State of Jammu and Kashmir.

Born on 17th July, 1915 Pandit Girdhari Lal Dogra was an active political leader who started his political career with the National Conference and then later joined Indian National Congress. He was a member of the erstwhile Jammu and Kashmir State Legislative Assembly, and served as Finance minister of the state for 26 long years. He was also a member of the Lok Sabha elected from the Jammu–Poonch Constituency and the Udhampur Constituency.

Dogra was born in Bhaiya Village in Kathua District. He started his education from Government Primary School Gurah Mundian, in a village near Bhaiya. After completing 5th from the primary school he got admission in Government Middle School, Hiranagar where he studied up to class 8th. Thereafter, he joined Government High School Samba where he completed matriculation. He did his graduation from Hindu College Amritsar and later at Law College, Lahore. He joined Indian National Congress and was elected as General Secretary of the Student’s Union of Hindu College, Amritsar.

He came to Jammu after completing law and joined as a junior advocate to Lala Dina Nath Mahajan, a renowned Lawyer. He also became an editor of a weekly newspaper “Kidasn” which was published from Jammu. In 1942, he joined the National Conference and started taking active part in the politics of J&K. He along with Moti Ram Baigra of Udhampur started the movement against the Begari system being perpetuated by the Raja of Chenani which forced him to abolish it. This was his first pro-poor political activity as a social service.

In 1952, Dogra was nominated to J&K Constituent Assembly from Hiranagar Constituency. He was elected from Hiranagar as MLA in 1957, 1962, 1967, 1972 and 1975 from Udhampur respectively. He was known to be a staunch Nehruvian. Dogra never lost an election and presented 26 budgets as the then finance minister. He also won the parliamentary elections twice, first from Jammu-Poonch Constituency in 1980 for 7th Lok Sabha, and later from Udhampur- Kathua Constituency in 1984.

He was also offered the post of Lok Sabha speaker by Indira Gandhi but he did not take up the offer. Dogra was a freedom fighter who later became a prominent political figure in the state. He was associated with the National Conference until it merged with the All India Congress Committee in 1964. He was married to Shakuntla Devi and is survived by two daughters, Sangeeta Jaitely and Nidhi S. Sharma. Dogra was the father-in-law of Arun Jaitley via his daughter Sangeeta Jaitley.

Though the erstwhile state of Jammu and Kashmir was cash starved and under employed state, As a Finance Minister of J&K State, Pandit Girdhari Lal Dogra made his personal efforts to get special packages to eradicate the basic problem of potable water by way of tube wells and laying water supply lines coupled with arrangements of power from Joginder Nagar power house now in Himachal Pradesh.

He made all efforts in construction of canals from rivers Ravi, Ujh, Tawi, Chenab and other possible water sources by introducing Koul system besides projecting the demand of most prestigious Ravi Tawi Irrigation projects.

It was Pandit Girdhari Lal Dogra who prioritised Power Sector as well as additional portfolio of power and initiated construction of Chenani Hydel Project, Bhaderwah, Rajouri powerhouses to bring electricity for a common man.

Dogra Saheb made his efforts in installing Chenab Textile in Kathua to provide employees of 3000 souls besides promotion of small scale industries, promotion of horticulture, road connectivity, schooling and higher education technical education, scholarship and education loan system. It was Dogra Saheb’s efforts that the languishing Sala Hydel project was cleared and work started on it.

Dogra was considered not only the icon of development, a source of employment and upliftment of the downtrodden but a family member of each society to act as mediator in solving the intra family and intra society disputes and differences and bring them on negation stage by avoiding litigations in the court.

For Dogra Saheb all were friends and enemy none that is why by blooming from the barren land of Kathua district, he ruled the hearts of all right from the top of Government of India and erstwhile State Government to a common man by leading a simple life. Pandit Girdhari Lal Dogra breathed his last on 27th November, 1987.