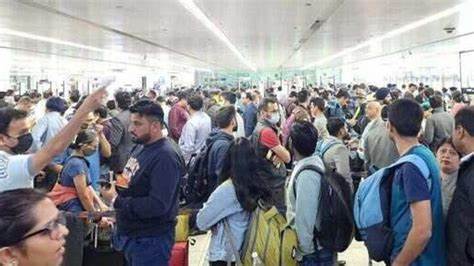 Union Home Secretary Ajay Bhalla on Thursday will review the issue of crowding at airports, particularly in Delhi and Mumbai, with key stakeholders, officials said.
Bhalla has convened a meeting in the wake of continuous complaints from passengers about the rush at the entry gates, luggage dropping, and security check areas.

Representatives of key stakeholders such as the Civil Aviation Ministry, airport operators, CISF, and Bureau of Immigration are expected to attend the meeting, an official said.
Over the last two weeks, passengers have been posting pictures and videos of long queues and crowding at the IGI in Delhi and the Chhatrapati Shivaji Maharaj International Airport in Mumbai prompting authorities to take note and asking airlines and airport operators to ease the traffic.

The Central Industrial Security Force (CISF) has formed a pool of more than 100 personnel to man additional security counters expected to be handed over to it to ease the congestion at large airports of Delhi and Mumbai, official sources said.
The central paramilitary, designated as the national aviation security force, has informed airport operators, airlines, and the Union civil aviation ministry that while it can bring on board some more security personnel, there can be “no compromise on security protocols and standard operating procedures followed by it for regular frisking of passengers and scanning of cabin baggage apart from fliers required to undergo extensive search due to specific profiling.”

The civil aviation ministry had on Tuesday asked airlines to deploy adequate manpower at all check-in and baggage drop counters, besides requesting the scheduled airlines to update their social media feed with real-time numbers on the waiting time at airports’ entry gates.
The continued commotion at the airports has forced airlines to ask passengers to reach airports early, do a web check-in, and carry only one piece of hand baggage for faster movement.