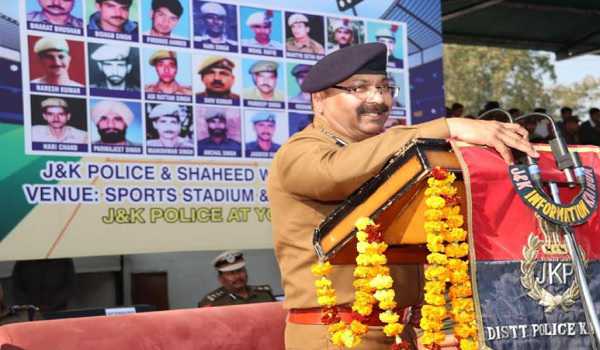 Jammu :  Jammu and Kashmir Director General of Police, Dilbag Singh on Monday said that The Resistance Front (TRF) is a mouthpiece of Pakistan based ISI and the security forces are taking action against it.

“Every institution or place used for terror activities is being identified and action under law would be taken against the involved. TRF is a mouthpiece of ISI to create disturbance and we have been taking action against it and will continue our intensified efforts,” Dilbag Singh said speaking to the media on the sidelines of T-20 Martyrs Cricket Championship in Kathua district.

The tournament is being organized every year to pay tributes to fallen heroes, he said.

“Though the infiltration has come down, the terror training centers are still functional, our border security grid and anti-terrorist grids are very strong to foil the infiltration attempts,” the DGP said and with regard to the demolishing of a structure at Pulwama, he said that it is the part of action being taken against the elements involved in anti-peace activities.

“After years of terrorism and destruction in J&K, supplying drugs yet another criminal deed of Pakistan to target our youth and society,” adding he said, “J&K Police has seized a number of consignment of drugs supplied from across the border.”

He said, “our intensified action against the drug trade would continue and people found involved in it would face stringent action.”

Singh said besides the action against the drug trade, J&K Police is playing its part in rehabilitating the affected persons for which he said that JK Police has fully equipped drug de-action centres functional in Srinagar and Jammu cities besides drug de-addiction centers at Range levels.

He also said that the J&K Police with the support of the people and the youth have been organizing different tournaments and events in memory of martyrs across J&K and informed that in the coming few days a grand event of football tournament is scheduled to commence in Srinagar.

Paying tributes to the fallen heroes of J&K Police personnel, the DGP said that the number of bravehearts who sacrificed their lives protecting the interests of the nation itself shows the capability of J&K Police in leading from the front in any situation.

The ADGP Jammu in his address said that the relation of Police and public is very strong in Kathua district and the people of Kathua have always supported J&K Police endeavours in organizing sports events.