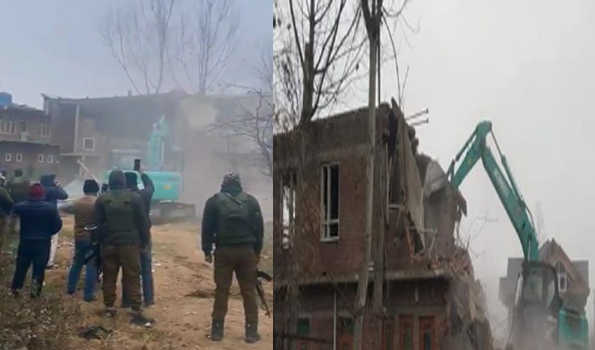 Authorities in Pulwama district of Jammu and Kashmir demolished the house of top Jaish-e-Mohammad militant Ashiq Nengroo, who is believed to be based in Pakistan.

Officials said the house of Nengroo at Hanjan Rajpora, Pulwama was demolished by district authorities as it was “built on government land”. The demolition was carried amid tight security.

Police sources said Nengroo is a main handler of JeM after he exfiltrated via a tunnel to Pakistan from Jammu in January 2019 along with his family.

Earlier this year, Nengroo was declared as a “designated terrorist” under the Unlawful Activities Prevention Act by the Union government.

“Nengroo has been involved in infiltration of terrorists into Jammu and Kashmir, who have been responsible for inflicting various terrorist incidents in Jammu and Kashmir… after running a terror syndicate in Kashmir, the said Ashiq Ahmed Nengroo is now engaged in a perilous campaign to orchestrate terror in Jammu and Kahmir, remote controlled from Pakistan,” a gazette notification issued by the Ministry of Home Affairs in April said.

Ashiq’s three brothers- two of them slain now- were associated with militancy. One of his brothers Abbas Negroo, who was also a militant was killed in an encounter in 2014 and another brother, Reyaz Negroo, is currently lodged in a prison in a militancy case.

This year Ashiq’s brother Manzoor Nangroo was found dead in mysterious conditions. Police had claimed that Manzoor was killed due to the rivalry between militant groups.