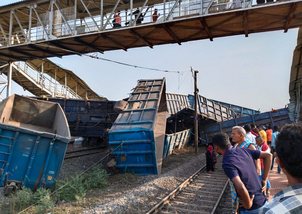 A goods train derailed at Korai railway station in Odisha’s Jajpur district on Monday morning, with wagons ploughing into waiting passengers, killing at least three of them and injuring seven others, officials said.

East Coast Railway (ECoR) officials said that the accident took place around 6.44 am when some people were waiting at the platform and the waiting hall for a passenger train. Station staffers said that the loco pilot of the empty goods train moving from Dongoaposi to Chhatrapur applied sudden brakes, causing eight wagons to derail and plough into the passengers on the platform and the waiting hall.

Jajpur Additional District Magistrate Akshay Kumar Mallick, who is monitoring the rescue operation, said that some derailed wagons climbed the foot-over-bridge and fell on the waiting hall and ticket counter.