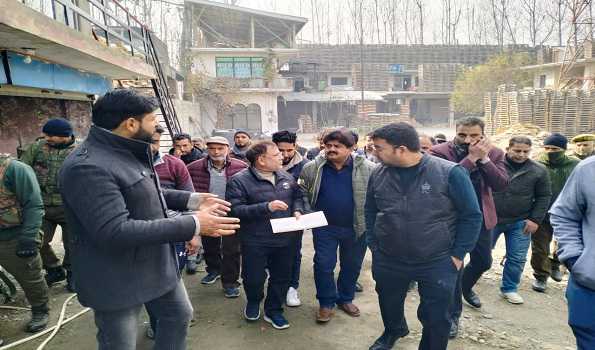 He said the manufacturers of the Kashmir willow bats are facing paucity of the wood and need a mass re-plantation drive of Willow trees to keep the industry alive in the international market.

A team of national and International journalists led by Deputy Commissioner Anantnag Dr Basharat Qayoom visited the Bat manufacturing units at Sangam to have an appraisal of the industry on Saturday during which Kabeer put forth several demands of the bat industry.

Kabeer who is also running GR8 Sports factory in Kashmir valley and manufacturing cricket bats that were being used by many International players during the top events of the game for the past several years.

“We urge the authorities to plant Willow trees on the river banks, coops and government wet land so that this industry could continue to lilve” Kabeer told UNI.

He also urged the inclusion of a Panchayat for the mass plantation drive of the willow trees throughout Kashmir valley and seedling be provided by the Sher-e-Kashmir University of Agriculture Science and Technology (SKUAST) Kashmir.

Kabeer also demanded to set up a dry port for the bat industry so that the product could be directly exported to the world in a container or half whatsoever instead of sending it first to Gurgaon which caused double transportation for the manufacturers making the product expensive for the international buyers.

Due to non availability of dry port, he said, if a bat has to be exported to America it charges extra Rs 6000 from here while its cost is only Rs 3000 at the factory which becomes an extra burden for the buyer. “We demand a subsidy on the transport charges so that the Kashmir willow bats could reach every cricket lover in the world without any difficulty”, he added.

He expressed dismay over the excluding the bats in the recently held Dubai expo and said the cricket bat industry should have been given representation in the expo so that Kashmir willow bat could become part of a big fare.

Kabeer said the International Cricket Council (ICC) headquarter is also in Dubai which is a big importer of cricket bats and representation of the Kashmir bats was a must there. “Kashmiri willow made bats are now known for their product value all across the world since its approval by the ICC”, the Vice President said.

Among other things, Kabeer demanded participation of the Kashmir bat industry representatives in the international buyer seller meet where Kashmir made bats could be represented that could help the industry to export its product in a big way.