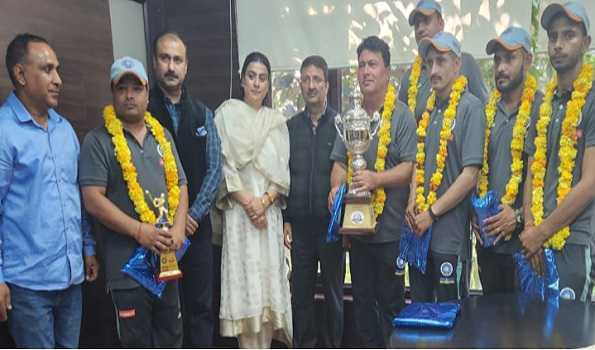 The J&K team emerged as the winner in the second season of the Sardar Patel National Divyang T20 Cup defeating Haryana in the finals on Sunday to lift the trophy.

While appreciating the performance of all-rounder Aamir Hassan of J&K in a low-scoring match which also earned him the player of the match award, Gull applauded the supporting role played efficiently by other members of the team.

Amir had scored 29 runs and bagged three wickets. The Player of the series award also went to J&K’s Wasim Iqbal for consistently performing for the team in a winning cause.

The Deputy chief minister of UP, Brajesh Pathak handed over the trophy to winners in a tournament that witnessed the participation of nearly 400 players distributed in 70 teams along with officials from different states and union territories.

The performance of the J&K team has earned appreciation from all quarters and sports enthusiasts rooting for the conduct of similar tournaments in J&K regularly so that specially-abled players of the union territory can showcase their talent.

Gull however, assured full support for the winning team and others waiting in wings to realize their potential.

The Sports Council Secretary also lauded the contribution of Former Ranji trophy cricketer Rajesh Gill and Avinash Uttam for their support to the players.