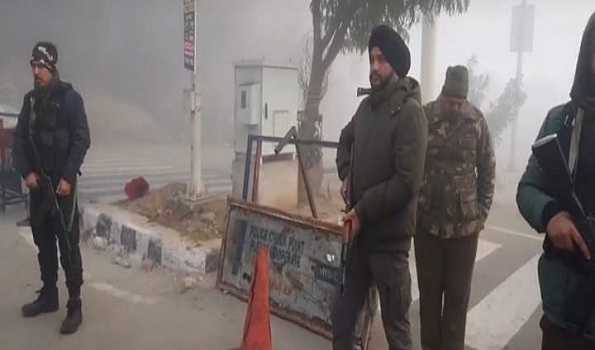 Security forces on Wednesday morning have neutralised three terrorists engaged in a fierce gun battle in Sidhra area here in the city outskirts.

“All three terrorists engaged in the gunfight have been killed,” said a senior police officer.

He said that in view of the Republic Day, border grid was already strengthened and the movement of heavy vehicles especially the trucks have a fixed timing to move on the highway.

“The movement of one truck on Sidhra-Narwal bye pass was found to be unusual by the security personnel after which it was followed by the QRT and was stopped at the check point on fourth bridge at Sidhra,” said Mukesh Singh, Additional Director General of Police Jammu Zone.

He said that the driver of the truck managed to flee but when the security personnel when frisked the vehicle, they were fired upon, which was effectively retaliated and encounter started.

The terrorist were heavily armed, he added.

The truck in which the terrorists were hiding, was set ablaze thus eliminating all the three terrorists, said police.

Police said that large quantity arms and ammunition has also been found while the identities and outfit of neutralised terrorists are being ascertained.