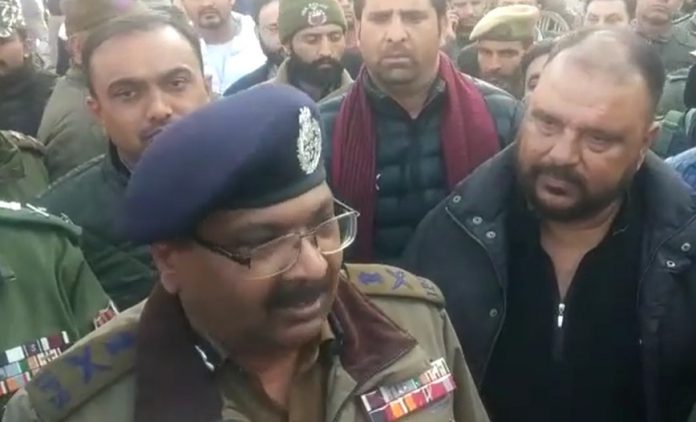 Vowing to hunt down terrorists involved in the two back-to-back strikes in Rajouri, Jammu and Kashmir Director General of Police Dilbag Singh on Monday said the IED blast this morning was a planned attack to target senior officers.

The DGP also promised that village defence committees(VDCs) will be rearmed after protesters claimed that the terror attacks could have been thwarted if weapons had not been taken away from the VDCs.

The siblings – aged four and seven years- were killed in an IED blast in Dangri hamlet where on Sunday evening, terrorists had opened fire on three houses killing four civilians and injuring six.

“The IED blast was a planned attack aimed at targeting senior officers (who were to reach the site). The officers reached the spot late. The incident had happened already,” Singh told reporters in Rajouri.

“We will have to give them a befitting reply,” he said.

Protesters carried the bodies of those killed in Sunday’s attack in a procession and kept them at Dangri Chowk, refusing to conduct the last rites. They demanded that the Lieutenant Governor should meet them.

The DGP went to the protest site to prevail upon the protesters to cremate the bodies of those killed in Sunday’s terror attack but faced the ire of people who raised the issue of the VDC being “disarmed” in the hamlet.

Replying to their concern, DGP said that guns will not be taken back.

“If some guns have been taken back, they will be returned. Wherever there is a need for more guns, they will be provided”, he said.

BJP’s J-K unit chief Ravinder Raina and senior BJP leader Vibodh Gupta said that 60 percent of guns have been taken back from the VDCs by police.

“It was a Bal Krishen, who had a gun and fired back, forcing terrorists to escape. His act saved over 40 people of the village”, Gupta told the DGP.

The DGP said that there is a need to give a boost to VDCs.

He said that the attacks were an act of cowardice.

“Only a coward can attack an innocent unarmed person. They did this act of cowardice and are hiding now. We will hunt them down,” he said.

Urging protestors to allow cremation of the bodies, he said, “We have to undertake the cremation of our loved ones as per rituals. We should not dishonour them”.

The DGP said that whatever will be the decision of the local leaders and families, “we will act accordingly”.

He appreciated the people of Rajouri for always standing by security forces in the battle against terrorists.

“They have fought no less than a soldier,” he said.

The DGP said that security will be reviewed and necessary measures will be put in place for the safety of the people.