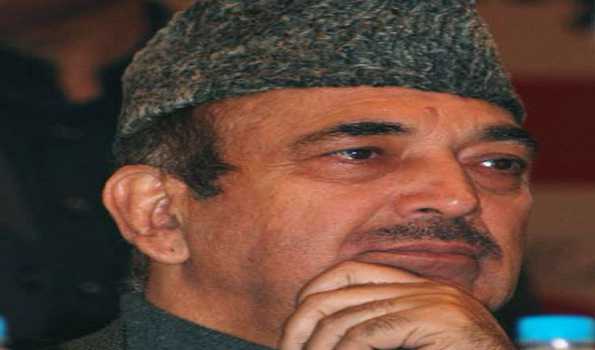 Jammu :  Condemning Rajouri attacks, former Chief Minister and Chairman Democratic Azad Party Ghulam Nabi Azad on Monday expressed concern about militant attacks stating that such acts of selective killings of a particular community even in the past had been used by terrorists as a tool to create disharmony in our society.

“I am deeply concerned and saddened to see the resurfacing of militant activities in Rajouri district for two consecutive days in which six precious lives including children have been lost and 15 injured, which is a matter of great concern for each one of us”, said Azad in a statement.

He condemned heinous acts of terrorism against civilians, particularly against the minority community in the state of J&K and requested the people of all sections of society not to fall prey to these evil designs of militants and maintain a climate of peace and harmony.

Azad also demanded that the State Government has to address the overall security situation promptly with great seriousness keeping in view the resurfacing of militant activities and trace out the militants responsible as early as possible.

Azad also spoke with Dr Mehmood, the medical superintendent of Rajouri hospital and he assured Azad that all injured civilians in the hospital are being taken full care of and will be provided all the facilities available in the hospital.

Azad also spoke with one of the injured civilians, who is currently recovering in the hospital.