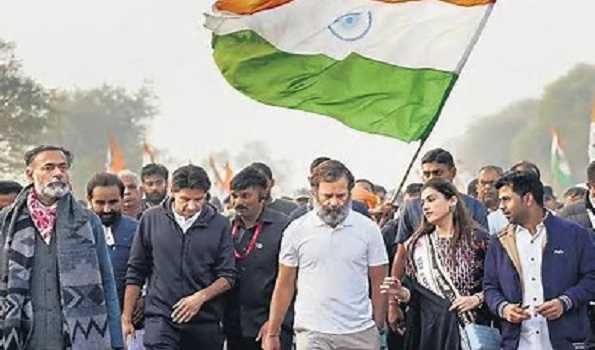 Jammu :  After passing through several parts of the country, AICC leader Rahul Gandhi led ‘Bharat Jodo Yatra’ in the last leg of its culmination, will enter Jammu and Kashmir on January 19 via Lakhanpur -the gateway to this region.

However, tight security arrangements are in place to prevent any untoward incident during the Yatra.

“The Yatra will enter Lakhanpur tomorrow (January 19) with a night halt and next day, it will start from Hatli Morh (Kathua) to Chadwal (23 Kms) and have a night halt,” party sources said.

They said that after a day break on January 21, the yatra will resume next day from Hiranagar upto Duggar Haveli, Nanak Chack (21 Kms) in Samba district.

“It will further start from Vijaypur upto Satwari on January 23 and the night halt will be at Sidhra,” sources added and said that further schedule shall be shared after it is cleared by the UT Administration and security agencies.

Meanwhile tight security has been put in place en route the Yatra.

“We have made elaborate arrangements for the Yatra all along the Jammu-Pathankot national highway that passes through three bordering districts,” they said.

Besides, strengthened patrolling along the highway, security has also been beefed up in the border villages as Republic Day is also heading.

“Several measures are taken for the yatra and the leaders have also been advised to take certain precautions,” they added.

Earlier in a day, as per handout, Youth Congress held a preparatory meeting with Kashmiri Pandits wherein the community members expressed anger towards the current BJP regime and showed immense love and support for Congress.

J&K Youth Congress president, Uday Chib accused BJP of exploiting the pain and suffering of Kashmiri Pandits and said the government had failed to protect the minority community in Kashmir.

He termed the Bharat Jodo Yatra as an unprecedented event in the history of India and says that it is the moral and political duty of every Indian to become part of it.

Lal Singh, who once believed to be hardcore Congressman, joined BJP after resigning from the party.

But, in 2018, Singh before the fall of the PDP-BJP government, resigned from BJP and floated Dogra Swabhiman Sangathan Party following uproar over his participation in a rally in support of the Kathua rape accused in January 2018.

However, Jammu and Kashmir Congress spokesperson Deepika Pushkar Nath on Tuesday also resigned from the party, citing its decision to allegedly allow Lal Singh to join the Bharat Jodo Yatra.

Moreover, J&K BJP chief Ravinder Raina on Wednesday said that before Bharat Jodo Yatra enters Jammu and Kashmir, Congress leader Rahul Gandhi should apologise to the nation, especially the people of the Union Territory, for the “sins committed by his family and party” in the region over the last 70 years.

He alleged that the Congress has been sympathetic to parties who supported terrorism and asserted that it was Prime Minister Narendra Modi who has “truly united the country”, while the opposition party has done otherwise.

“Gandhi family and Congress have made historic blunders related to Jammu and Kashmir and are directly responsible for the eruption of terrorism which has consumed thousands of lives,” said Raina.

“Before entering J&K, Gandhi should apologise to the nation, especially people of J-K, over the mistakes and sins of the party which it committed over the past 70 years,” Raina here told reporters.