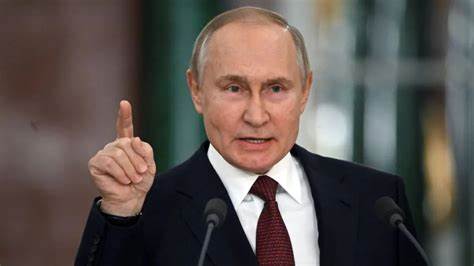 The Kremlin on Thursday accused Kyiv and Washington of turning a deaf ear to its concerns and charged the United States was using Ukraine as a battleground to weaken Russia.
It came as President Vladimir Putin insisted Russia was aiming for a speedy end to the fighting.

“Our goal is… to end this conflict. We are striving for this”, he told reporters. “We will seek to make sure that it all ends, and the sooner, the better”.

“All conflicts end, some way or another, with talks… The faster our adversaries (in Kyiv) understand that, the better it will be,” Putin said.

Moscow’s military chief has said Russian forces are now concentrated on wresting control of the eastern Donetsk region where the battered city of Bakhmut has become an epicentre of fighting.

Officials in Moscow have repeatedly said in recent months that they have not ruled out talks with Ukraine.

They blamed the closure of diplomatic channels on President Zelensky, who has said he will not negotiate while Putin is in power.

The Ukrainian leader has returned from a historic trip to Washington, where he told Congress his country was “alive and kicking” and supporting it was an investment in global security.

He enjoyed a hero’s welcome on the lightning trip on Wednesday, in which US President Joe Biden committed nearly $1.8 billion in military supplies including, for the first time, the Patriot missile defence system.

Putin warned this could further draw out the conflict, saying: “Those who are confronting us say this is a defensive weapon… There will always be an antidote.”

“The people who are doing this are doing it in vain. It’s just prolonging the conflict, that’s all,” he told reporters.

Earlier, the Kremlin said Biden and Zelensky were not listening to “Russia’s concerns”.

“Not a single word was heard warning Zelensky against the continued shelling of residential buildings in towns and villages in Donbas and there were no real calls for peace,” spokesman Dmitry Peskov said.

“This suggests that the United States is continuing its line of de facto fighting an indirect war with Russia to the last Ukrainian,” he added.

The eastern Ukrainian region is one of four Moscow claims to have annexed — despite never fully controlling it.

Gerasimov also said that Russia had used hypersonic missiles for the first time in Ukraine including Kinzhal missiles — part of an arsenal of weapons Putin has described as “invincible”.

Ukraine fears a rising onslaught of missiles and has faced a slew of attacks from drones, many bought by Russia from Iran, as Moscow pummels power plants and other civilian infrastructure while the country shivers in the winter cold.

In Donetsk, an AFP reporter visited the frontline village of Bogorodychne, from which the Russians had been pushed out.

Its pre-conflict population of around 1,000 people had been reduced to Yuri Ponomarenko, 54, who returned several weeks ago, and “a mother and son who never left,” he said.

“I felt that I needed to come back, I just had to,” said Ponomarenko, who braved landmines to return home, where debris and wrecked cars littered the looted village.

In the southern region surrounding the recently recaptured town of Kherson — which has been shelled persistently by Russian forces — officials said they had uncovered a grave with six people showing “signs of torture”.

On Thursday, Zelensky said that he stopped in Poland on his return journey from the United States and “discussed strategic plans for the future” with Polish President Andrzej Duda.

Meanwhile a car blast killed an official in the Russian-controlled village of Lyubimivka in southern Ukraine, Moscow-installed authorities said, the latest in a series of attacks against Russian-linked officials.

“Today Andrei Nikolayevich Shtepa, a sincere patriot of his native land, died tragically as a result of a car explosion,” authorities said on Telegram, blaming “Ukrainian terrorists” for the death.

Lyubimivka is on the eastern bank of the Dnipro river, which is occupied by Moscow’s troops after they retreated from Kherson city last month rendering the river a new front line.