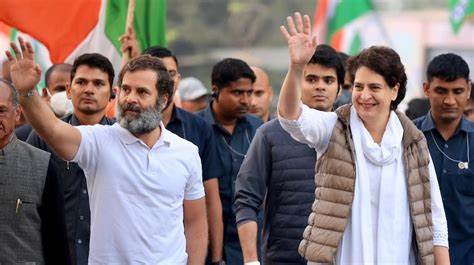 Congress leader Priyanka Gandhi, her husband Robert Vadra and hundreds of women joined Rahul Gandhi as the Bharat Jodo Yatra resumed from the neighbouring Bundi district on Monday which is being observed as a day to spread the message of women empowerment.
The march, which resumed around 6 am from the Tejaji Maharaj Mandi at Babai, is being called a daylong Nari Shakti Pad Yatra on Monday.

A large number of women including party workers and women from surrounding areas joined Rahul and Priyanka Gandhi and other yatris on the Kota-Lalsot Mega Highway as they marched from Babai to Pipalwada in Swaimadhopur district, where they will halt for a break.
Rahul Rao, a padyati who has been walking with the yatra right since the beginning on September 7, said, “The BJY on its 96th day began with the daylong Nari Shakti Pad Yatra at around 6 am from Tejaji Maharaj Temple at Babai village after prayers, singing of national anthem, national song and flag hoisting.

A large number of women stood on the roadside to greet the yatris and join the march, he further said.
Monday is the yatra’s seventh day in Rajasthan. It is also its last day in Bundi district.
After marching for around 6 km from the Tejaji temple, the yatra entered Tonk district at around 7.15 am and will march around 5 kilometers in Tonk before entering Swaimadhopur through Pipalwada.

Over 5,000 women started with Rahul and Priyanka Gandhi when the yatra resumed this morning and a large number of women joined on the way, said Ajay Sharma, Congress’ Indergarh (Bundi) block president, who is also marching along.
Rahul Gandhi also spoke to the padyatris, he added.

The 96th day of the BJY is dedicated women empowerment and that is why it is being called Nari Shakti Pad Yatra for Monday, said BJY state co-coordinator Kapil Yadav.
Rajasthan is the only Congress-ruled state where the yatra has entered and will cover about 500 km over 17 days before entering Haryana on December 21 The yatra started from Kanyakumari in Tamil Nadu on September 7 and has so far covered the five southern states of Tamil Nadu, Kerala, Andhra Pradesh, Karnataka, and Telangana, and then traversed through Maharashtra and Madhya Pradesh.
It will conclude in Jammu and Kashmir in early February 2023, covering 3,570 km in 150 days.