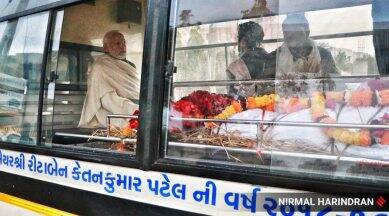 Prime Minister Narendra Modi’s mother Heeraben Modi passed away at Ahmedabad’s UN Mehta Hospital at the age of 99. Honouring his mother for her “glorious” life, PM Modi took to Twitter to post a heartfelt tribute wherein he wrote that on her 100th birthday when he met her, she told him something that he will remember forever. “Work with intelligence and live life with purity,” the PM’s tweet added.

Heeraben was said to be recovering on Thursday after the hospital released a statement saying so. She was hospitalised owing to ill health on Wednesday. The prime minister had rushed to the hospital in Ahmedabad after learning about his mother’s health condition, and stayed there for an hour and a half.

PM Modi, who is scheduled to attend several programmes later in the day, has reportedly not cancelled any of those and left for Ahmedabad. He is scheduled to flag off a Vande Bharat train in West Bengal’s Howrah district and has other development works lined up.

Tributes have begun pouring in for the demise of Heeraben Modi. Union home minister Amit Shah, defence minister Rajnath Singh and Bahujan Samaj Party (BSP) supremo and former Uttar Pradesh chief minister Mayawati were among some names who extended their condolences to PM Modi for his loss.

Heeraben Modi was born in Vadnagar in Mehsana, Gujarat, on June 18, 1923. She has five sons and a daughter, with PM Modi being the third of six children. She lived in Raysan village near Gandhinagar with the prime minister’s younger brother Pankaj Modi.