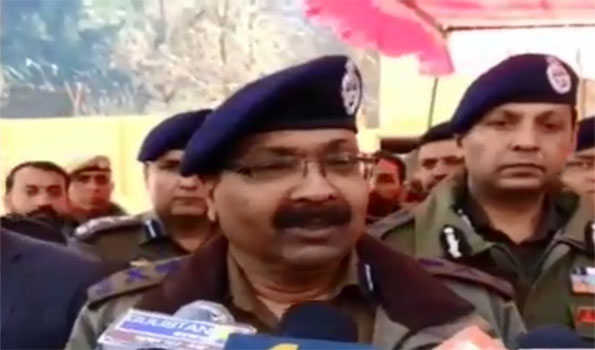 Jammu:  Stating that Pakistan and its agencies are making continuous attempts to revive the terror structure and want to keep anti-national activities alive in any form, the Jammu and Kashmir Director General of Police, Dilbag Singh on Wednesday said that the police along with other security forces are working in mission mode to ensure terror free Jammu and Kashmir.

“District Poonch is by and large militancy free and I congratulate personnel of Police, other Security forces and people of the area for their joint efforts,” the DGP said while addressing the Police Darbar during his day long visit to bordering Poonch district.

He said, “some people in the past have managed to cross the border and are in touch with their associates to revive the terror structure but we have to make sure that no space is allowed to anyone linked with terror.”

The DGP said that J&K Police alongwith other security forces have been working in a mission mode to ensure terror-free J&K and stressed for utilizing the technical as well as human resources in tracking the terrorists who managed to infiltrate.

He also directed for monitoring and keeping vigilance on terror support system to demolish the ecosystem.

“A number of terror funding cases have been busted in the recent past yet there are reports of some elements attempting to generate funds for terror activities which are on constant radar,” the police chief said.

He said that Pakistan and its agencies are supplying drugs with criminal intention to harm our young generation and to generate funds for terror activities.

Later speaking to the media, the DGP said that the locals of the area have always extended their support to forces in war against terrorism.

He said that the situation across J&K is improving very fast and efforts are on to strengthen it further and added, “stone pelting, hartal call culture has completely ended and youth are taking part in constructive activities.”

He said that it is being ensured that people don’t face any inconvenience during their day to day activities.

With regard to the inauguration of the Police station building and lower Subordinate Quarters at Loran, he said that it is aimed to provide better working and living facilities to Jawans and officers.

ADGP Jammu Zone while speaking on the occasion said that Jammu and Kashmir Police alongwith other security forces has been working tirelessly to provide a better and secure environment to the people.

He said that we have to continue our efforts with further strength to achieve the desired results.