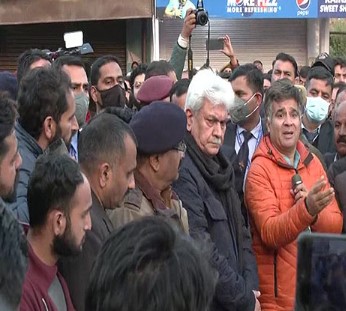 J&K Lt Governor Manoj Sinha on Monday met the family members of the four civilians who were killed in two separate terrorist attacks and said that the perpetrators of this attack will be punished soon.

Expressing his condolence, Sinha said that the entire nation and the government stand firmly with the families in this hour of grief and the administration is committed to looking after the needs and issues of all the families and people of the district.

Subsequently, he held a meeting with the Sarpanch of Dangri village, DDC, BDC members and the families of those killed.

“We have given full freedom to the security forces and I want to assure the people that the perpetrators of this attack will be punished soon. Terrorists will have to pay a very heavy price for this despicable attack. It is our firm resolve to crush terrorists and terror ecosystem,” Lt Governor said during the meeting.

He had announced Rs10 Lakh and a Government job to NoKs of each of those civilians martyred in the attack.

“Death cannot be compensated, it is an irreparable loss,” LG added.

The National Investigation Agency (NIA) is likely to visit Upper Dangri village in Jammu and Kashmir’s Rajouri district where five people, including a child, were killed and many more were injured in two separate terrorist attacks since Sunday evening, sources said.

Highly placed sources indicated that a team led by a senior NIA official may visit the spot any time today or tomorrow following a new modus operandi adopted by the agency to visit places where such terror incidents happen.

An incident of firing was reported in Dhangri on Sunday evening in which four locals were killed and six others were injured.

“As per the information, two terrorists came and targeted three houses in the Upper Dhangri area. Four casualties were reported. The search operation is on. Police, Central Reserve Police Force (CRPF) and Army troops have cordoned off the area. We will try to neutralize the two terrorists soon,” Additional Director General of Police (ADGP), Jammu Zone, Mukesh Singh said.

However, Dr Mehmood, Medical Superintendent of Associated Hospital in Rajouri said that multiple bullet injuries were found on the injured body.

Several organisations have called protests in Jammu on Monday against the terrorist attack in Rajouri.

Police have strengthened the presence of security and forces and are continuing their search operation in the Dhangri village.