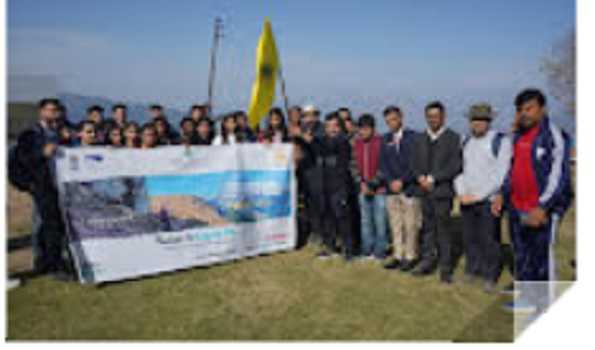 Organised by Patnitop Development Authority in collaboration with Shri Mata Vaishno Devi University and Department of Excise, J&K, the Pancheri to Nathatop Trek is famous for adventure quotient and scenic beauty alike.

Around 40 trekkers belonging to States/UTs like J&K, Delhi, Bihar, and Rajashthan, were thrilled to see the sacred bowlis with beautiful carvings, seasonal dhoks of nomadic population, magnificent views of mighty mountains and never ending meadows, forests of pines, deodar and oaks.

They learnt about more than 500 years old Sankri temple associated with the legend Sankri Devta, and other local deities.

“Witnessing the sunset in all its glory while being on the ridge trail is etched in my memory!” said Vanshika, a trekker from SMVDU, while another trekker was mesmerized at the unfolding autumn in the forests.

Dr. Singla appreciated the continuous efforts of PDA to promote its unique destinations, activities and other offerings of tourist interest.

He was delighted at the number of students from across the country, who have got and are eager to get an opportunity to explore Patnitop Circuit in the ongoing series.

“I congratulate Patnitop Development Authority and Shri Mata Vaishno Devi University to have taken an initiative to expose the youngsters to the rich natural and cultural beauty of Jammu Division as well as encourage a healthy lifestyle,” he said.

DDC Pancheri-Moungri urged the UT Administration for providing the road connectivity from Pancheri to Nathatop and Sanasar, so as to complete the tourism circuit Krimchi-Pancheri-Nathatop-Sanasar.

“The ‘Visit Patnitop’ series has upped the tourism potential and promotion manifold in the Patnitop Tourism Circuit,” said CEO PDA.

He added, “Being organised for the second consecutive year, Pancheri to Nathatop Trek is now our annual feature. Ensconced in a spectacular natural setting, this trek at an altitude of 8500 ft is nearly 22 kms, allowing one to stay in the mountains longer and connect with the nature.”

The trek is much sought after by trekkers and avid photographers for beautiful sunsets and clear blue skies owing to pollution free environment.

Nagendra Singh Jamwal, Registrar, SMVDU, said “The University undertakes several activities to imbibe the culture of healthy lifestyle in students. Such treks help them move away from the sedentary lifestyle, be more active and closer to the nature.”

Furthermore, Department of Excise, J&K, has decided to collaborate with educational Institutions to effectively engage the youth in the fight against drug abuse. The trek was also aimed at creating awareness about the dangers of drug abuse amongst the youth.

Towards the end of the trekking, participants enjoyed bonfire and musical night, followed by a felicitation program.