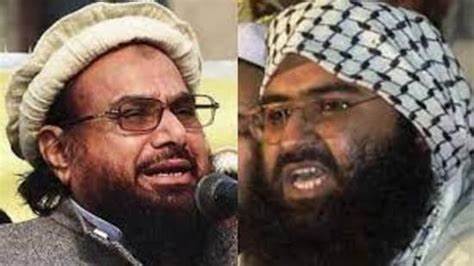 On the day External Affairs Minister S. Jaishankar reminded the world about ever present terror factory in Pakistan at the UNSC, Islamabad blamed India for attack on global terror king pin Hafiz Saeed, head of proscribed Lahore based Lashkar-e-Toiba (LeT), in 2021.

Saeed’s jihadist outfit along with Pakistani Inter-Services Intelligence (ISI) joined hands on November 26, 2008, to conduct massacre in Mumbai in which along with innocent Indians, US and Israeli nationals were also gunned down. While Pakistan’s foreign minister Bilawal Bhutto railed against India on usual Kashmir issue, his junior minister ranted against the Modi government from Islamabad and blamed Delhi for 2021 bomb blast near Johar Town home of the global Sunni jihadist.

The December 13, 2001, attack on Parliament along with Pathankot air base attack, Uri Brigade attack and Pulwama attack were conducted by Bahawalpur, Punjab based globally proscribed Jaish-e-Mohammed terrorist group headed by Masood Azhar, the chairman of the Alvi family run terror factory.

While the intelligence world knows that Masood Azhar and Indian terror fugitive Dawood Ibrahim are under Pak security of the head of state level, Bilawal Bhutto wants the world to believe that the Deobandi jihadist is in Afghanistan and wants the Taliban to hand him over to Pakistan. Even as junior minister Hina Khar accused India for getting UN terror designation for some four Indians blocked using its clout in the 1267 Committee, fact is that Pakistan’s iron brother China tried to block global terrorist designation for Masood Azhar four times before caving in, and has been openly batting for Islamabad in the Al Qaida sanctions committee. China using its veto power in 1267 Committee has blocked global terror kingpins like Saeed’s brother-in-law Abdul Rehman Makki, who carries a million-dollar bounty on his head, 26/11 killer Sajid Mir and JeM’s operational chief Rauf Azhar Alvi.

That Khar chose to highlight the so-called attack on super jihadist Hafiz Saeed in a press conference in Islamabad on Wednesday, reveals the fear and threat to terror king pins in Pakistan in future. The Uri surgical strikes and the Balakot attack by the Narendra Modi government has instilled uncertainty in the minds of Rawalpindi GHQ and its civilian proxy because of which Islamabad feels that these super jihadists are under threat of elimination. Such is the fear of Modi’s India that Hafiz Saeed and Masood Azhar are no longer seen in public spewing venom against India from either Occupied Kashmir or hinterland Pakistan. Indian fugitive Dawood Ibrahim is under level seven protection of the Pak security in Karachi and Khalistani separatists in Lahore are afraid to even eat after the death of terrorist Harvinder Singh alias Rinda. The remnants of Indian Mujahideen, the demon child of ISI sponsored Karachi project, which killed nearly 500 innocents during the previous UPA regime, are nowhere to be seen or heard.

While Khar called India a “rogue state” on Wednesday, no one in the global community except iron brother China is buying this nomenclature as virtually every terror attack in the past two decades in the world has had organic links in Pakistan. However, Islamabad’s problems have become more complicated since the Modi government assumed power in 2014 and after the Taliban took over reins in Kabul on August 15, 2021. Just as Pakistan fears instant retaliation from India on account of any jihadi terror attack, it is now fearing the worst on its western border as the Taliban regime is totally at odds with Shahbaz regime. Extremists groups Tehreek-e-Taliban Pakistan as well as Baloch insurgents groups are up in arms against Rawalpindi. The Pakistan card in Kashmir no longer is working as the Jammu and Kashmir police with security forces has managed to take out Pak based terror group leaders and their local proxies in the Valley. Today, there are only terror modules of three to four jihadis with limited shelf life are operating in the UT of Jammu and Kashmir, whose sole target are the Kashmiri Pandits and other minority communities of Kashmir. Even the Pakistan friendly ecosystem in Kashmiri media and beyond has turned against their handlers as a result of which journalists are being threatened by ISI proxies.

With the Modi government refusing to have any truck with either the military or the civilian establishment in Pakistan till terror is removed from the bilateral equation, Islamabad has no options but to rave and rant. No one is listening.