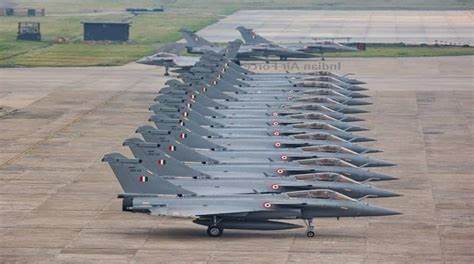 The Indian Air Force (IAF) on Thursday shared an update on Twitter on receiving the last of the 36 Rafale jets. “Feet dry! ‘The Pack is Complete’. The last of the 36 IAF Rafales landed in India after a quick enroute sip from a UAE Air Force tanker. (sic),” the IAF tweet read, along with the picture of the aircraft.

The first batch of five Rafale jets had arrived at the Air Force Station in Ambala in July 2020. These were meant to be a part of the 17 Squadron, the “Golden Arrows”, which was resurrected a year before, a government statement had said at the time. These were formally inducted the next month by the IAF. “The Rafale deal was a game changer for India’s national security and its induction is a strong message for the world and especially for those who challenge India’s sovereignty,” Defence Minister Rajnath Singh had said at the time. The Rafale deal – worth around 9 billion dollars – was sealed with a view to add new jets to the IAF fleet.

In February, India received three of the last four fighter planes. The jets – fully equipped with India-specific requirements – were handed over by France at Istres-Le Tube air base of Rafale manufacturer Dassault Aviation, situated north-west of Marseille.