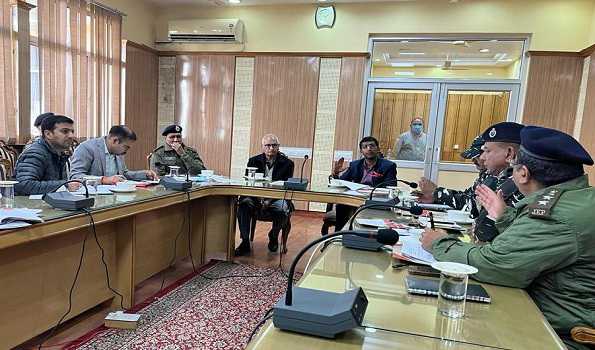 Jammu:  Expecting heavy rush of pilgrims on the eve of New Year, Shri Mata Vaishno Devi Shrine Board has installed over 500 closed circuit cameras to main surveillance at Bhawan situated in Trikuta Hills of Reasi district in Jammu and Kashmir.

Notably, last year on December 31 midnight, around 12 pilgrims died and several suffered injuries in a stampede due to heavy rush.

Former Judge, Suresh Kumar Sharma Member Shri Mata Vaishno Devi Shrine Board on Friday held a meeting with Cadre of Board and Security agencies to review Risk Management Strategies and to determine the broad approach regarding preparedness for safe pilgrimage prior to onset of New Year-2023 on the directions of Board Chairman, Lieutenant Governor, Manoj Sinha.

At the outset, the Chief Executive Officer, Shri Mata Vaishno Devi Shrine Board, Anshul Garg briefed about various measures in place and proactive steps taken for smooth regulation of expected influx of pilgrims likely to visit in large number from various parts of the country and abroad the abode of Shri Mata Vaishno Devi on the onset of New Year which includes issuance of RFID cards, effective crowd management, working out plans for decongestion of the entire track, particularly the Bhawan area, separation of entry, exit routes at Bhawan and all time surveillance through CCTV dedicated network of over 500 cameras.

The CEO said that the Radio-frequency identification (RFID) based yatra registration cards have been started with the focus to enhance not only the security but also ensure real time tracking of pilgrims on the track enroute Bhawan for better regulation of the pilgrims in accordance with the holding capacity of the trek and the shrine area (Bhawan).

He further emphasized the security agencies not to allow any pilgrims without a valid RFID card for which additional hand held scanners may be put to use with sufficient staff to plug any shortfall.

Garg said that Yatris are being regularly informed through announcement to register under RFID based Registration Card through Shrine Board Registration Counters only before start of their pilgrimage and if any pilgrim found without RFID cards, he will not be allowed for the pilgrimage.

He also underscored that those pilgrims registered under RFID not returning their card after completion of Yatra shall be charged a fine of Rs 100/- as deterrence.

The Chief Executive Officer also discussed the concern about surge in COVID cases and informed that all the stakeholders have been advised to wear masks while dealing with the yatris.

He also informed that the Shrine Board has made wearing of face masks mandatory for every pilgrim attending the Atka Arti and in the darshan queue.

Suresh Kumar Sharma, however, while reviewing the various mitigation measures in place emphasized coordinated efforts amongst all stakeholders for working on strategies for risk aversion and identifies the congestion and crowd holding spots for better crowd management before the onset of New Year.

In the meeting, PS Ranpise, IG, CRPF highlighted major challenges for the deployed security forces in coming days for managing the expected influx of pilgrims on New Year. He briefed that additional forces as per request shall be deployed in and around Katra and on the track enroute Bhawan in coordination with other security agencies to ensure fool-proof security and effective Yatra management.