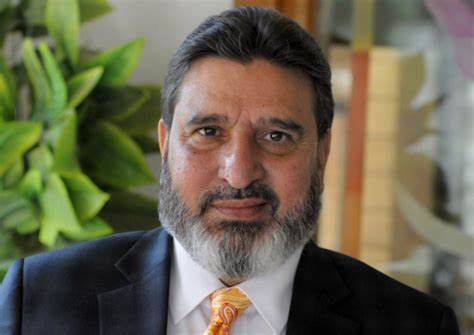 Apni Party president Altaf Bukhari Thursday described Jammu and Kashmir government’s new land policy as “draconian” and “totally inhuman”, saying it will not be allowed to be implemented.

Recently, the J&K administration has notified that all the outgoing lessees, except in the case of subsisting/expired leases for residential purposes, shall immediately hand over the possession of the land taken on lease to the government, failing which the outgoing lessee shall be evicted.

On Wednesday, Jammu and Kashmir Lieutenant Governor Manoj Sinha has defended the new land lease laws, saying that necessary changes were being made in land laws to benefit the common man as earlier legislations were ”very regressive”.
“These land laws are draconian. No where in the world are people removed from possession,” Bukhari told reporters here.

He said the lease holders mainly have commercial establishments and if their leases have expired and have not been extended, then it is not their mistake.
“These laws cannot be implemented, it cannot stand the scrutiny of law. It is totally inhuman … The Apni Party will not allow these draconian laws to be implemented,” he said.

The former minister said his party did not want to politicise the issue and that is why had not said anything over it. “But, because the politicians here are like vultures, they need issues. They want to create storm in a tea cup. Had it been left to Altaf Bukhari and the Apni Party, we could have resolved it without making it an issue,” he said.

Political parties including the National Conference (NC), the Peoples Democratic Party (PDP) and Peoples Conference have also criticised the government’s move.
Meanwhile, Bukhari welcomed NC vice president Omar Abdullah’s remarks that if his party was voted to power, it will revoke the Public safety Act (PSA).
“It is very good if he (Abdullah) wants to do it. I will not go into this that his grandfather enacted it or why he did it, but, it is good if he wants to do it. Why should we criticise something good or someone who was wrong yesterday, but wants to take the right path today,” he said.

Bukhari said if Abdullah was feeling remorse, then it is fine and the Apni Party welcomes it. “I think no one should be pained over this, or say how many people were slapped with the PSA. We also have been a part of some governments. Why did these people not rake this up when they were a part of the government?” he said, apparently referring to Abdullah’s criticism by Sajad Lone-led Peoples Conference.