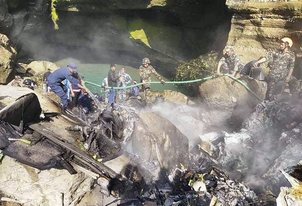 Nepalese rescuers resumed their search on Monday for four persons still missing after a passenger plane with 72 people, including five Indians, crashed into a river gorge while landing at the newly-opened airport in the resort city of Pokhara, killing at least 68 people onboard.

The accident took place on Sunday, the Himalayan nation’s deadliest aviation accident in over 30 years.