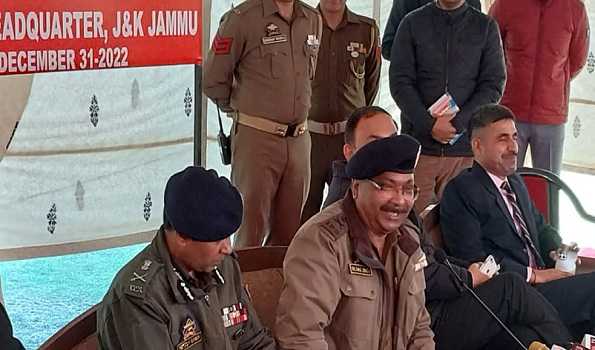 Jammu :  Stating that outgoing year was the most peaceful on the security front, the Jammu and Kashmir Director General of Police, Dilbagh Singh on Saturday advocated for mission ‘zero terror’ in 2023.

“The figures on security front in 2022 clearly indicates the way our security forces eliminated the number of terrorists besides maintaining law and order situation and progress is seen towards ‘zero terror’ but still, lot is needed to be done in the coming year,” the J&K Police Chief said addressing a customary year-ender press conference here.

Lauding the public, Singh said without the cooperation and help of the people, it was impossible, adding, “with all support from the public, we curbed the tentacles of terrorism and it will also continue in 2023 as well.”

Comparing the last four years, the DGP said in 2022, 186 terrorists including 56 foreigners were killed.

He added that 100 youth joined terrorist outfits this year out of which 17 were arrested and others were killed in different encounters while 18 are left and the security forces are after them.

Mission ‘Zero Terror’ and to wipe out the “terror eco-system wherever it exists in Jammu and Kashmir will be the prime focus of the security forces in 2023, adding he said, “majority of the terrorists killed this year were affiliated with the Lashkar-e-Taiba and Jaish-e-Mohammad outfits.”

He further added that 146 terrorist modules were busted in the year and 188 weapons including AK 47 rifles, 275 pistols, 354 grenades, 61 grenades, 61 IEDs including some ready to use that were drone dropped were also seized.

He congratulated police and other forces for successfully foiling the drone dropping bids of weapons in Jammu region and seizing huge quantities of weapons.

The DGP also added that 55 vehicles and 28 houses that were found involved in supporting terrorist activities were seized and 649 people were booked under PSA.

However, on civilian and security forces killing, he said, “compared to previous years, 14 cops and 17 para-military personnel were killed, which is the lowest ever while civilian casualties were also less and only 24 law and order incidents were reported.”

The police chief also said the TRF is a mouth piece and umbrella being operated from across the border and any terrorist activity done by the LeT or JeM, is attributed to the TRF by their handlers (ISI) and added, “all the threat cases are investigated and no one will be spared issuing threats to minority community and other sections of the society.”

On G20 events being planned in Jammu and Kashmir likewise all over the country next year, Singh said, “it is a proud moment for the people of Jammu and Kashmir and whatever will be required including security structure, will be put in place.”

Principal GDC, Qazigund attached for unauthorised use of biometric attendance