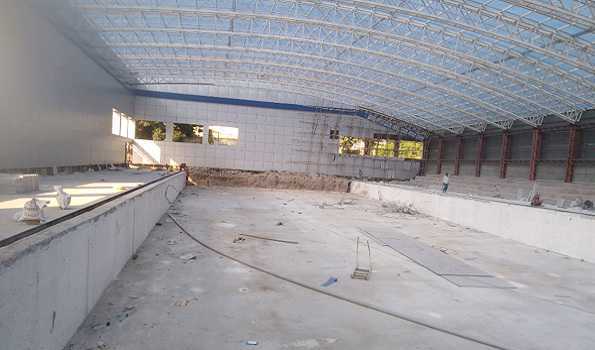 Jammu :  Being upgraded to an all weather facility, the much awaited swimming pool that has already missed several deadlines, is expected to complete in 2023 here at Maulana Azad Stadium.
The pool is the only government facility in Jammu division that caters budding swimmers and the fitness freak.
“Almost 60 to 70 percent of the upgrading work is complete and in the next 3 to 4 months, it is expected to be ready to start with the activities,” a senior official from the Engineering wing of the J&K Sports Council claimed, on condition of anonymity.
The official added that along with total renovation, a toddler pool has also been introduced for the beginners, adding, “the facility now has been transformed into an all weather pool and by April next year, it is likely to be ready.”
Notably, the financial crunch had allegedly slowed down the pace of work previously at the swimming pool, which was undertaken in 2019 at Maulana Azad Stadium, situated in the heart of the Jammu city.
“The facility was supposed to be handed over to its parent organization– J&K Sports Council — in the month of June in 2021 after renovation, but the work could not be completed allegedly due to financial crisis,” sources in the Sports Council said.
“In 2020 due to Covid lockdown, the work remained suspended but it resumed at the end of the same year with the unlock exercise,” they said and added, “the work is in progress and has been expedited after remaining affected due to unavoidable reasons.?
“We are hopeful to meet the deadline next year and provide a reason to smile to the swimmers,” he added.
All-weather swimming pool was one of the major demands of the swimmers, especially the trainees, desiring to represent in various competitions, which they have missed since years due to poor infrastructure.
The total expenditure to be spent in the upgradation of the swimming pool into an all-weather facility was Rs 3.50 crores.
The pool will have standard depth (national standard) and to be one of the best facilities to hold championships of national level besides a learner pool, sitting tiers and changing rooms.
According to sources in the J&K Sports Council, “Out of total Rs 351.2 lakh (3.50 crores), an estimate of Rs 303 lakh (3.03 crores) was prepared for the upgradation of the existing pool to all-weather facility while Rs 31.76 lakh was prepared for the construction of a splash pool.?
They said that the estimate also included construction of a borewell at a cost of Rs 12.5 lakh and landscaping of open space around the swimming pool at a cost of Rs 3.76 lakh.