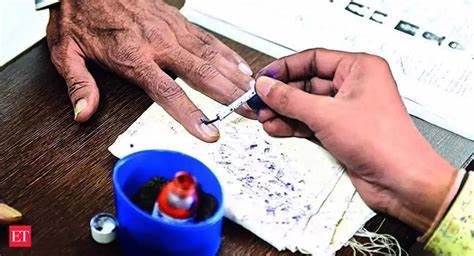 The Aam Aadmi Party looks on course to end the BJP’s 15-year rule at the Delhi municipal corporation with the latest trends and results showing the party has crossed the magic figure of 126, leading the BJP by over 25 seats.
According to figures available at 11.30 am, the AAP has won 56 seats and was ahead in 77, totalling up to 133. The BJP on the other hand has won 46 and was leading in 58, adding up to 104.
The Congress on the other hand was lagging far behind, winning just four seats and leading in six.

The MCD has 250 wards, and the simple majority mark is 126.
Independent candidate Shakeela Begum has won the Seelampur seat in northeast Delhi.
The counting of votes began at 8 am, and initial trends (at 9:30 am) put the BJP ahead of the AAP by a significant margin, but the pendulum swung in the AAP’s favour soon after.
This was the first election after the MCD was reunified earlier this year.
In 2017, the BJP had clinched 181 of the then 270 municipal wards while AAP had won only 48 and the Congress finished third with 30.
AAP chief spokesperson Saurabh Bharadwaj exuded confidence his party will emerge victorious.
“We will win more than 180 seats. We have decked up our office… The BJP did not cite any achievement of their 15-year tenure in the MCD during the campaigning,” he told the media at the party office.

BJP’s national spokesperson Shehzad Poonawalla said the exit polls got it completely wrong.
“Even after 15 years of the BJP rule, the party has retained its vote share on the basis of its work. People should avoid premature celebrations,” he told reporters.
Delhi BJP president Adesh Gupta said, “Despite 15 years of anti-incumbency, our performance is better. We worked for the people of Delhi at the municipal corporations but may be some people were not happy. There was no anger against the BJP though.” Delhi BJP vice-president Virendra Sachdeva said it is going to be a tough contest.
“However, we will prove the exit polls wrong and the BJP will come to power in the MCD for a fourth consecutive term,” he said.

The mood at the AAP office here was celebratory with loudspeakers blaring patriotic songs and the entire premises decked up with colourful balloons.
AAP workers, nervous but hopeful, had their eyes glued to LED screens throwing the latest counting trends. They are also keeping a tab on social media and some of them were seen constantly tweeting as the final touches were being given to the office for celebrating what could be the party’s first victory in municipal polls here.
“AAP hi aayegi MCD mein is baar humko bharosa hai (We are confident the AAP will win this MCD poll),” said a party worker blowing blue and yellow balloons at the office.
Delhi Chief Minister Arvind Kejriwal is expected to address people after the results. The high-stakes election to the 250 wards of the Municipal Corporation of Delhi (MCD) was held on December 4, sealing the electoral fate of 1,349 candidates in voting machines.
A voter turnout of 50.48 per cent was registered in the elections.
The results of this election, largely touted as a three-cornered contest among a spirited AAP, a confident BJP and a hopeful Congress, may have ramifications beyond the national capital.