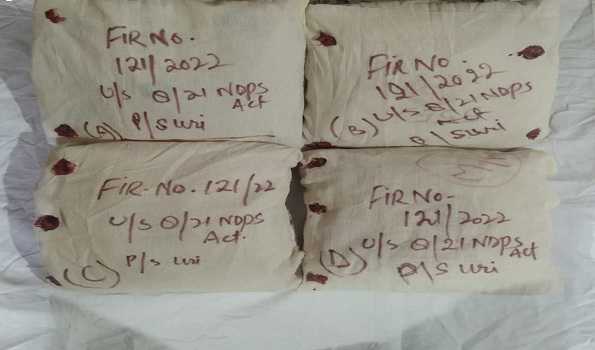 Srinagar :  Jammu and Kashmir Police and Army in a joint operation apprehended one drug peddler and recovered a huge quantity of heroin worth crores in Baramulla district on Sunday, police said.

They said during a joint checking post established by Police Uri and 3 Rajput unit of army at AD Post, one drug peddler identified as Imtiyaz Ahmed Bhat, a resident of Sahoora Uri seeing the security forces tried to escape.

However, Police said he was apprehended and 4 packets of suspected heroin like contraband was recovered valued worth crores in black market from him.

A Case under the Narcotic Drugs and Psychotropic Substances (NDPS) Act has been registered in Police Station Uri and investigation set in motion.