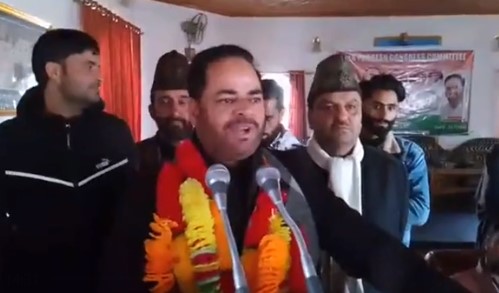 J&K Pradesh Congress Committee (JKPCC) president Vikar Rasool Wani said that BJP Govt at the Centre has failed to come up to the expectations of people of Jammu and Kashmir.

“Mishandling of situation and enacting different stories with regard to restoration of democratic process, development and employment besides promises on resolution of other issues have fallen flat whilst the policies adopted by both Centre and State Govt toward J&K have disappointed and caused enormous inconvenience to people,” Wani said while addressing workers’ convention at Handwara.

Vikar Wani blamed Central Govt for failing to address genuine needs of the people and said they (people)are feeling betrayed and cheated, given the wrong policies and failures of BJP Govt on all fronts. So called good governance and developmental claims nowhere to be seen. The series of back to village programmes both in Jammu as well as in Kashmir at the cost of Govt exchequer have so far yielded no results, with the result, people have started realizing that Central Govt only wants divert the attention of the people from real issues under the garb of B2Vs.

JKPCC chief said elections are being delayed on one pretext or the other, but that will not hide the anti-people policies of the BJP Govt at Centre, rather it will further expose it (BJP).

Since the BJP Govt assumed power at Centre the developmental process, employment generation, development of rural and poor people and many other significant measures benefitting people directly initiated by the UPA-I and UPA-II have received serious setbacks, the irony is Modi Govt is making false claims with regard to development and unemployment which has risen considerably, unprecedented price hike on essentials and other required items have depressed people economically to a largest extent, PCC chief rued.

Wani also slammed the State Govt for failing to address the grievances of people and said digging roads and filling these cannot be called development, the reality is that developmental process has taken a back seat under the BJP Govt while as people are only observing inauguration of series of projects being done on daily basis.