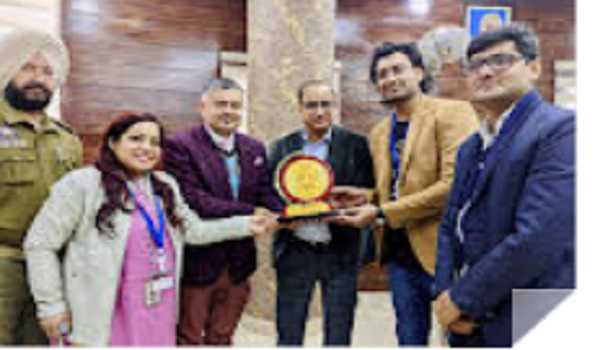 Secretary Mining, Amit Sharma, who was chief guest on the occasion, addressed and motivated a large gathering of technocrats and young software developers attending Devfest.

Sharma said that Google Developers Group Jammu can play host to some of the sharpest minds in the technology space which will provide access and skills to Jammu tech and student community.

He elaborated that the future belongs to these developers and all government departmental services are going online including successful implementation of e-Office in all government offices.

He further revealed that such events provide good exposure to local developers and students who get an opportunity to discuss emerging tools and technologies.

Amit Sharma mentioned that the J&K government is encouraging IT reforms in a big way through lot of initiatives like recent co-partnering in the 25th National e-Governance Conference which was held in SMVDU Katra, promoting capacity building programmes and fests besides giving platform to all the potential stakeholders of IT domain in the shape of internship programmes in J&K e-Governance Agency.

The Secretary also shared the features of ongoing digital J&K campaign which was a much needed step towards steering UT to next level of reforms wherein all services are provisioned through active campaigns like BEAMS, ‘Aapka Mobile, Hamara Daftar’, ‘Aapki Zameen, Aapki Nigrani’ and e-Challan and e-Marketplace in the Mining sector for convenience of general public.

Shikha Saxena, Customer Engineer, Google, started the session with her presentation and shared her knowledge with the students. She enlightened the students with her working experience at Google India and also shared about the job opportunities for developers at Google India.

Also, other prominent speakers included Pawan Kumar, Head of Engineering at Frontier, Ayush Later, Abhinandan Trilokia said that global trends have shaped up in such a way that developers are thinking, up-skilling themselves and focusing on what’s next, particularly product management and designing for accessibility which are gaining interest and popularity.