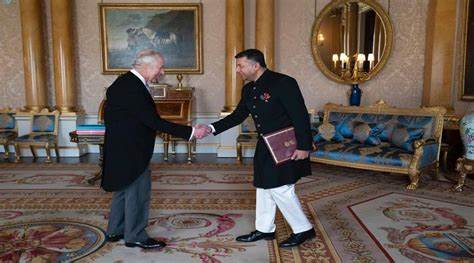 Indian High Commissioner to the UK Vikram Doraiswami has become the first Indian diplomat to present his credentials to King Charles III, in a ceremony steeped in tradition and involving a classic horse-drawn carriage riding through the streets of London to Buckingham Palace.

The presentation of “Letters of Commission”, a formal letter from President Droupadi Murmu to the monarch as Britain’s Head of State, on Thursday marked the formal start of his UK posting. The ceremony symbolises the Indian Head of State asking the King to give “credence” to the new High Commissioner and that the new diplomat speaks on behalf of India.

“Our friends in the United Kingdom really know how to make this feel very special as we get to go in a four-horse buggy, something specific for Commonwealth heads of mission. So, we have greater horsepower,” Doraiswami said on a lighter note, with reference to the pomp and ceremony of the event which has been unchanged since Victorian times.