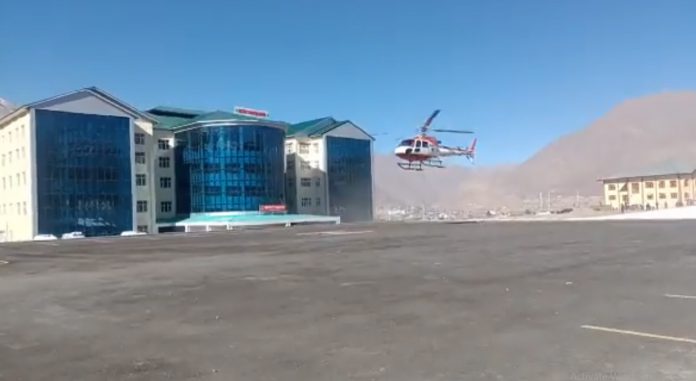 He added that on Monday the first emergency patient was airlifted to Srinagar from the helipad of Kargil district hospital which has been made functional today.
CMO Kargil Dr Munnawar Hussian Wazir while talking to media said that we have a parking lot available at the hospital which will help in evacuating any patient or bringing any patient there.
“Helicopters can land there now and it will be very beneficial for people of Kargil as in any emergency situation, time factor plays an important role and it will help in time saving and patients requiring emergency treatment can be evacuated to other hospitals or brought there”, he said.

An official said that there are 14 Helipads established by UT administration at far flung areas of Kargil and after the operation of this helipad at the district Hospital, it will be easy to evacuate the emergency cases from these areas.
He said that during winters, roads remain closed and patients are suffering as Hospitals are very far from the helipad and people weren’t able to reach hospitals during wet weather.
He said that now patients won’t suffer as helicopters can directly land at hospital helipad and can get treatment on time.