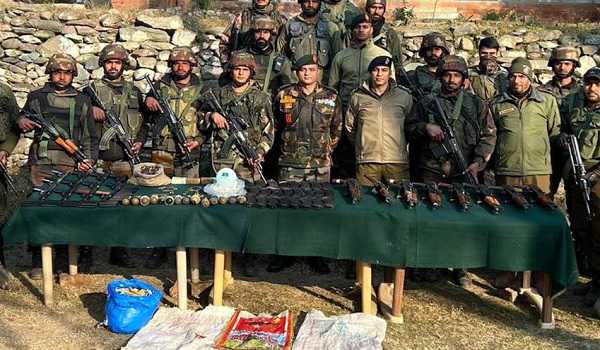 Srinagar :  Security forces achieved a major success in Kashmir when they recovered a large cache of arms including 8 AK series rifles and 12 pistols in Baramulla district of Jammu and Kashmir, police said.

The recovery was made by Police and Army at Hathlanga sector of Uri on Saturday.

“In a joint operation, Barmulla police along 3 Rajput of army recovered huge cache of arms and ammunition including 8 AKS 74u with 24 magazines and 560 rounds , 12 pistols (Tokarev type) with 24 magazines and 244 rounds, 14 grenades, 81 balloons with Pak flag imprint, wheat bags/ synthetic gunny bags with made in Pakistan print 5 No’s among other incriminating materials recovered from the area,” a police statement said.

Police said a case has been registered in Police Station Uri in this regard and investigations have been taken up.