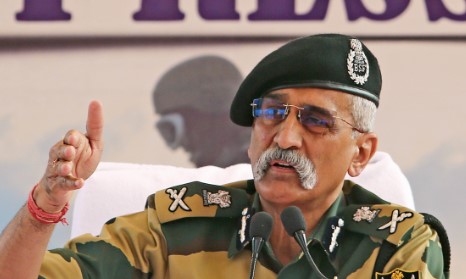 The government has sanctioned a fund of Rs 30 crore to procure surveillance cameras, drones and other monitoring gadgets for the BSF deployed to guard Indian fronts along Pakistan and Bangladesh even as it is deploying 5,500 security cameras in the front areas, the chief of the paramilitary said Wednesday.

Reiterating that the illegal activity of drones along the western front (Pakistan) remains a “major challenge” for them, BSF director general Pankaj Kumar Singh said at present the force “does not” have a fool-proof system or solution to counter the menace posed by unmanned aerial vehicles (UAVs).

“However, we will find solutions in the times to come and we are increasingly detecting and killing the drones,” he said while interacting with reporters on the eve of the 58th Raising Day of the BSF.

The BSF too has developed some “low-cost technology solutions” that helps us to mount effective surveillance in the border areas. Similar tools provided by foreign vendors were found very costly and hence we have now in-house developed low-cost sensors and surveillance devices, he said.

The DG said the troops of his force were getting “more and more” efficient in detecting and shooting down drones that fly from across Pakistan into India.

We shot down 16 drones along the Pakistan front this year as compared to one that was brought down in this region last year, he said.

According to the BSF, 114 drone sightings were made by its troops along the Pakistan front (both IB and LoC) last year while the numbers this year till November 10 have risen to almost double at 218.

The BSF chief said ensuring robust cyber security was also a “major challenge” before security agencies like the BSF as he cited the recent example of the Ransomware attack on the servers of the AIIMS in Delhi.

Now with 5G technology coming up, we need to be prepared to ensure that our systems are safe, he said.

The force has also “improved the defences” along the Line of Control (LoC) area in Kashmir, the DG said, informing that a total of 117 forward defence locations have been “reinforced” or strengthened by providing better housing infrastructure for the troops at those locations.

The BSF independently guards the India-Pakistan international border running from Jammu to Punjab and further up to Rajasthan and Gujarat. It works under the operational command of the Army at the LoC.

Talking about instances of infiltration by terrorists from the Pakistan side into India, the DG said the force is undertaking all efforts to ensure that they cannot sneak in from its area of responsibility.

“We will definitely not say that it is not possible (infiltration from Pak border) but we make all efforts to ensure that no terrorist can breach the border. We have undertaken a number of initiatives in this context,” the DG said.

Talking about the drones menace, Singh said the force was now undertaking forensic study of the seized drones, shot while entering the border from Pakistan, and they were getting “wonderful information” from the chips inserted in them like its flight path, launch pad and destination and the duration of the flight etc.

“We are providing some very good monetary incentives to our troops who shoot down the drones even as we are coordinating with the state police forces to undertake patrolling in depth areas,” he said.

A senior officer of the force that the Punjab Police has provided as many as 300 police personnel to undertake deep patrols with the BSF in border areas of the state that are vulnerable from the angle of drugs and weapons smuggling from Pakistan. He said “largely”, the drones captured by them are of Chinese origin.  The DG said the security situation along the Bangladesh border was good but the issue of infiltration by people who come into India without documents remains.

There are continuous instances of smuggling of drugs and weapons along with some small items on this front but overall things have been good, he said.  The use of lethal power (weapons) has been drastically down here (India-Bangladesh border) but the flip side is that the criminals know this and they take liberty by attacking our troops. However, the troops are authorised to use lethal weapons in such situations, he said.

The government has sanctioned more non-lethal weapons to us for this front, the DG said.

The top BSF commander said with the extension of BSF jurisdiction from 15 to 50 km, after an order issued by the Union government, the force has seen that it has been more successful in tackling border crimes and the rate of detecting these instances and apprehending criminals has “slightly gone up”.  The BSF was raised on December 1, 1965  and it is primarily tasked to guard international borders with Pakistan and Bangladesh.

The force has about 2.65 lakh personnel in its ranks as part of 193 battalions and some other field formations.