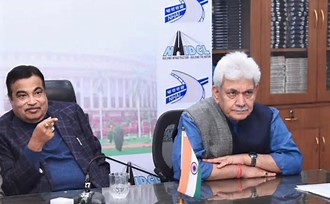 Union Minister of Road Transport and Highways Nitin Gadkari and Lieutenant Governor Manoj Sinha on Wednesday held a review of the ongoing National Highways projects in Jammu and Kashmir.

After a detailed discussion, the meeting finalised the design for the upcoming Inter Modal Station, Katra, which will improve the travelling experience of pilgrims visiting Shri Mata Vaishno Devi shrine and provide better infrastructure and mobility to the citizens.

According to an official statement, the meeting also reviewed the ongoing National Highways Authority of India (NHAI) and National Highways and Infrastructure Development Corporation Ltd (NHIDCL) projects in J-K and steps have been taken to resolve various issues related to projects.

Keeping in view the tourist influx at prominent tourist places such as Sonamarg in winter and also to ensure uninterrupted road connectivity to locals, the meeting deliberated on the measures to keep Sonamarg open for the public during the season.

Giving special impetus to surveillance and monitoring of vehicular movement, NHAI and NHIDCL will also install CCTV cameras on its highways.

NHIDCL’s works related to the Amarnath Yatra were also reviewed and directions were issued for the completion of ongoing works to ensure smooth and hassle-free pilgrimage.

The Lt Governor said the J-K administration was giving utmost priority to infrastructure development in the Union Territory and various steps were being taken for the timely completion of ongoing projects.

“The priority of a self-reliant Jammu Kashmir is modern infrastructure and connectivity. Our prime objective is to create facilities for people to ensure sustained economic growth and social upliftment,” the Lt Governor said.