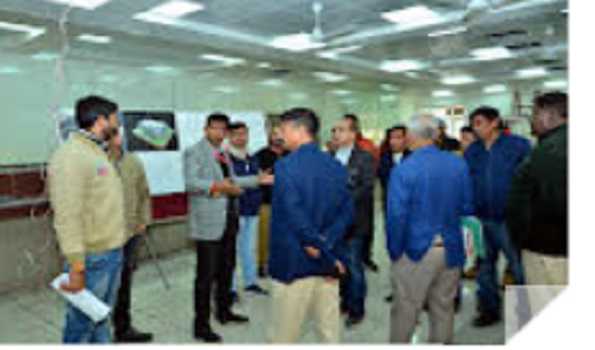 Jammu :  The Chief Executive Officer, Shri Mata Vaishno Devi Shrine Board Anshul Garg on Saturday reviewed the pace of ongoing mega projects at Bhawan situated in the Trikuta Hills of Katra town in Reasi District of Jammu and Kashmir.

Charing a meeting with the officials of executing agency and concerned engineers to take a review of Durga Bhawan and Sky-Walk on the directions of the Shrine Board Chairman, Lieutenant Governor, Manoj Sinha, who recently visited to the Shrine and conducted inspection of ongoing projects, Garg stated that Durga Bhawan, which is likely to be commissioned shortly, has provisions to accommodate 2500 pilgrims on a daily basis, bound to give a new shape and structure to the comforts and convenience of the pilgrims.

The building once completed shall have provisions for providing locker facilities to keep valuables by the staying pilgrims coupled with bathing ghats, aimed at making the stay quite pleasant and congenial besides, providing hygienic and wholesome food at nominal rates, he said.

Construction of Durga Bhawan is part of the approved Master Plan of Bhawan area, prepared by the School of Planning and Architecture, New Delhi.

The Master Plan seeks to achieve the target of ensuring maximum accommodation for pilgrims by 2031.

Shri Mata Vaishno Devi Shrine Board and the Central Public Works Department (CPWD) have inked a memorandum of understanding for the construction of Durga Bhawan.

Meanwhile, taking an extensive review of the Durga Bhawan, the Chief Executive Officer directed the executing agency to daily report about the manpower deployed for completion of work, besides, to plan the sequence of events to meet the progress.

The CEO also reviewed the status of Sky-Walk, conceptualized by the Shrine Board to overcome the problem of multidirectional flow of yatra and a chaotic condition at Bhawan.

It has been designed by the School of Planning and Architecture, New Delhi and is being executed by Central Public Works Department (CPWD) with technical vetting by Indian Institute of Technology (IIT) Roorkee.

While reviewing the progress, the CEO stressed upon the executing agency and concerned engineers to work with an added dedication and ensure completion of ongoing mega projects within the stipulated time frame.

He asked the executing agency to redouble their efforts in mobilizing men and machinery for completing the projects in stipulated time frame and urged to ensure productive and fruitful utilization of the available resources. He also stressed to clear all bottlenecks so that works could be completed as per timeline.