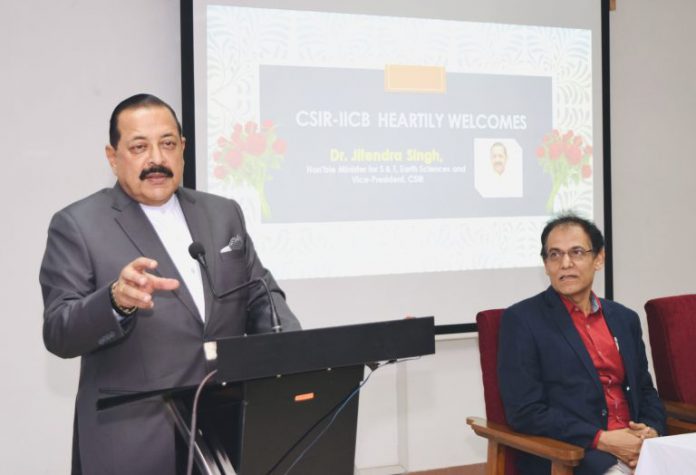 Dr Jitendra Singh said that Healthcare has been one of the key focus areas of the Modi government since 2014, and he has taken several measures in the last 8 and half years to make Indian Healthcare future-ready.

Dr Jitendra Singh underlined that there is a Paradigm Shift in approach as far Healthcare is concerned as the government is focusing on health as well as wellness, by eliminating the factors responsible for illness and making treatment of diseases inclusive.

Dr Jitendra Singh was happy to note that the Indian Institute of Chemical Biology (IICB) was established in 1935 as the first non-official centre in India for biomedical research and was included within the aegis of CSIR in 1956. He said, the institute continues to exploit its unique strength in Chemical biology for understanding various diseases to find out therapeutic solutions and the Process chemistry for generics is one of the priority areas in addition to novel drug development of various diseases.

Dr Jitendra Singh was happy to note that the institute has developed an oral vaccine for cholera, herbal products for controlling gastric ulcer, empirical treatment for vitiligo, diagnostic kits for malignancy and hormonal disorders and a device for early detection of Parkinson’s disease. He said, although the strength of CSIR-IICB has always been basic biomedical research, during the last 8 years emphasis is being given on goal-oriented research directed towards commercial exploitability.

Dr Jitendra Singh also informed that although the CSIR-IICB was established to carry out research in infectious diseases like kala azar, cholera, malaria etc, but it has gradually transformed into a cutting age research institute in biomedical research with emphasis on basic understanding of the infectious diseases, immune system, cancer, metabolic diseases including cardiovascular diabetes and liver diseases.

Dr Jitendra Singh said, works done in the institute to fight Type 2 diabetes, which was more common in older adults has started affecting huge number of younger people is phenomenal. The Minister said, it will go a long way for the health and well-being of younger people engaged in making of Modi’s New India.

Dr Jitendra Singh also lauded the role of IICB in joining the mission to fight Corona pandemic since the beginning of the crisis as it helped in covid testing, genome sequencing to convalescent plasma therapy trial. He said, IICB scientists are also taking a lead role in CSIR mission mode projects starting from drug development, drug repurposing to antiviral mission.

Dr Jitendra Singh said, CSIR-IICB today is engaged in research on diseases of national importance and biological problems of global interest, employing sophisticated state-of-the-art technology in keeping with the rapid and unprecedented momentum that life science research has gained globally over the last 50 years. The scientific staff has expertise in a variety of areas including chemistry, biochemistry, cell biology, molecular biology, neurobiology and immunology which promotes productive interdisciplinary interaction.
IICB started its journey from a small house in central Calcutta (41, Dharmatala Street) as Indian Institute of Medical Research (IIMR) in 1935. It was founded by Dr. J. C Ray and his young clinicians colleagues like H.N. Ghosh, A.C. Ukil and Nabajiban Banerjee. The aim of the institute was to conduct research on biomedical sciences both in basic and applied aspects. There was a need to investigate health problem of the country.

Rabindranath Tagore appealed to the people “The establishment of such a well-conceived centre for medical research depends upon adequate donations and endowments received from the public. Let me entreat my fellow-countrymen for a ready response to this appeal for assistance for this institution that through their support they may make it a real success”. Acharya P C Roy also requested wealthy people to generously respond and help the Institute.

Presently, CSIR-IICB has 2 campuses. The main campus is at Jadavpur and the second campus is situated at Salt Lake. The Salt Lake Campus was in February 2016.