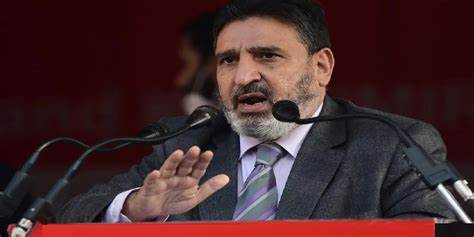 Apni Party president, Syed Mohd Altaf Bukhari alleged that the divisive politics of the traditional political parties has been a curse for the J&K people over the past 75 years.

While addressing party’s rally in North Kashmir’s Tangmarg town, Bukhari reiterated his vision for J&K and its people. He said, “Apni Party has a simple yet significant agenda. We want to ensure peace, prosperity and development in J&K and political and economic empowerment to its people.”

Bukhari said, “People have been suffering here for the past several decades due to the turmoil and bloodshed. Apni Party wants to get people out of miseries caused by the protracted turmoil here.”

“But, Apni Party wants to put an end to the exploitative politics of these traditional parties. We have a vision for a better future for J&K and its people. We will lead people to peace and prosperity, and not to jails and graveyards. Unlike the traditional political parties, Apni Party does not believe in the politics of deception,” he added.

Emphasizing on sustained peace, he said, “J&K people, who have been suffering for quite a long time, deserve a sustained peace now. Only a durable peace will pave the way for the prosperity and development of this land. We cannot afford to let our youngsters suffer continually. Our youth deserves a peaceful and prosperous life. I assure you that Apni Party will keep striving for a better and promising future for the young generation,” he maintained.

” Apni Party will make every effort to ensure the jailed youth are released. We have already begun the process to get our youngsters out of the jails,” he added.