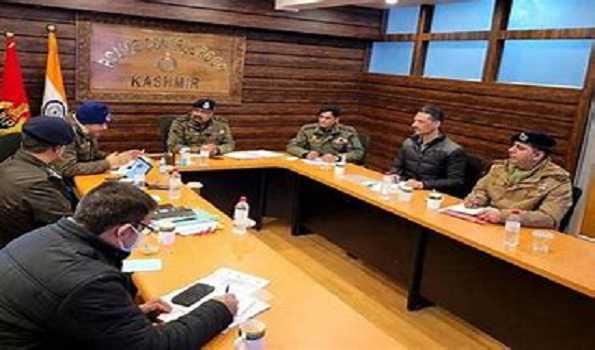 DGP also chaired a meeting of senior officers of Kashmir Zone to review the crime and security scenario of the valley at PCR, Kashmir.

Reviewing the arrangements for the upcoming Republic Day functions, the DGP directed for ensuring that all required and necessary security arrangements are in place.

He directed for coordination and synergy among all the stakeholders and directed the officers that while dealing with any situation they should ensure that law-abiding people are not put to any inconvenience during their day-to-day activities.

He also directed for stringent action against OGWs or anyone supporting terrorism, or narco terror modules in the UT.

Addressing the officers, the DGP complimented them for successfully achieving various goals which were set for the year 2022.

He enjoined upon them to rigorously follow basic policing methods including human intelligence generation, record keeping and maintenance of Registers at Police Stations as per Police Rules.

He said that action against the terror ecosystem must be carried forward meticulously and in a coordinated manner.

Although JK Police, along with other forces have got successes across Jammu and Kashmir against the terrorists, stringent actions against the terror support system, narcotics and narco terror modules are needed, the DGP stressed. He called upon the officers to continue the trend with an aim to bring an end to it.

DGP also directed the jurisdictional officers to ensure direct supervision of UAPA, NDPS and other special reported heinous cases so that the investigation and disposal of all pending cases as well as of new cases are brought to logical conclusion on priority.

He also directed that the quality of investigation and disposal of these cases needs to be further improved and stressed for adopting the latest technology and standard practices to expedite investigation of cases on merits for judicial determination.

The DGP also said public cooperation has helped to make our efforts fruitful in maintaining law and order.

He reiterated that the support of the community is essential to maintain a terror free environment and more and more public cooperation should be ensured by prioritizing community-based programmes.

He directed the officers that all possible help should be extended to the public as and when required.